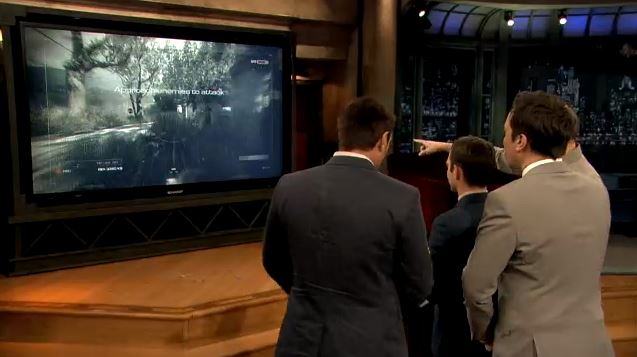 The Navy SEALs use highly trained dogs in combat. It’s crazy, but the pups can take orders through their own doggie earpieces and a vibrating collar that directs them to move left or right.

It’s real, and developer Infinity Ward is using the technology in its first-person shooter Call of Duty: Ghosts, which is due out for PC and consoles (new and old) in November. Infinity Ward producer Mark Rubin brought the game with him to show off on NBC’s Late Night with Jimmy Fallon last night, and fellow guest Elijah Wood, best known for playing Frodo in the movie The Lord of the Rings, got the chance to control one of the K-9 commandos.

Check it out in the video below:

Wood uses the mutt, which is known as Riley, to sneak around and take out enemies in a demolished version of San Diego. Since Ghosts’ debut, Riley is one of the things that fans have responded the most to. Infinity Ward always planned Riley as a close partner in the game, but the company wasn’t expecting him to catch on and attain Internet meme status, which he definitely has.

Infinity Ward community manager Tina Palacios told Rock Paper Shotgun, “You know what’s funny about that is, we were all watching the Xbox One reveal event in our theater, and after we got the reaction in real time — we didn’t expect any of this at all, by the way — the studio became divided. Half of them said, ‘OK, the dog absolutely has to die.’ And then the other half — I’m on this half — said, ‘Whoa, no way! People love him.’ It’s a constant debate, but we do have an answer.”

That answer? The dog is probably gonna die.