A 1-meter Lightning-to-USB cable at the Apple Store is $19.00. A knockoff at Amazon.com that claims to be “just like Apple products” is only $1.95. Which is probably why Apple built approved accessory checking into iOS 7.

Unfortunately for Apple, one company has already cracked the authentication scheme.

iPhone5mod, which sells Lightning connectors from $6.90 and up, published a video yesterday showing its products not triggering the iOS 7 alert that indicates you’re using uncertified accessories: 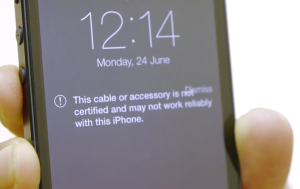 Don’t count on the joy to last, however.

Apple has tipped its hand that some kind of authentication protocol is in place, and the company could simply decide not to allow un-approved cables: They could just stop working. But modders have tipped their hand as well that they’ve broken the encryption scheme. The challenge for modders is that their solution is embedded in hardware, while Apple’s is in software.

In other words, Apple could update the encryption scheme with every subsequent software update.

At the very least, we’ll likely see a cat-and-mouse game just like we see with iPhone jailbreaking — or printer refill cartridges — that will likely result in long-term pain for users.

My suggestion: beware what you buy. A developer and former colleague of mine, Alan Bailward, has tried several non-Apple-approved Lightning cables and didn’t have happy results:

Speaking as a purchaser of non-apple lightening cables, get the Apple ones. Of the two I have neither “just work” and one will only charge when turned one way, and only sync the other. The other cable didn’t work and a third would sync no matter which way the cable was turned, but only charge on one side.