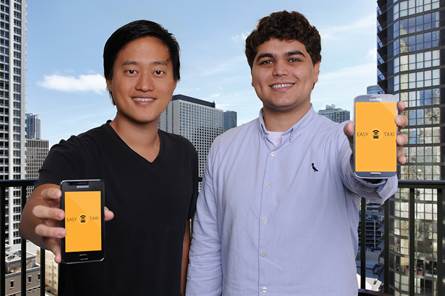 Taxi apps are taking over the world. Today a Brazil-based company called Easy Taxi closed $15 million to drive growth around the globe.

Easy Taxi operates along the same lines as Uber Taxi, Flywheel, and Hailo. People hail cabs using a mobile application and the system calls the nearest available vehicle. Passengers can find out who the driver is and follow their progress in real time. This has the dual benefit of greater convenience for consumers, who don’t need to stand on the corner waiting for a cab, and taxi dispatchers benefit from greater efficiency.

Startups like these have attracted a ton of attention over the past year — passengers are increasingly turning to smartphones to fulfill their transportation needs, investors are throwing tens of millions of dollars into the space, regulators are debating the legality of the e-hailing models, and taxi companies are realizing that a mobile presence is necessary for survival.

Easy Taxi was founded in São Paulo in 2011 and was one of the first companies to enter the sector in Latin America. It now has a network of more than 30,000 taxi drivers and is active in 30 cities in nine countries in Latin America and Asia. This financing will fuel growth, and Easy Taxi plans to soon expand into Manila, Hong Kong, Bangkok, and Fortaleza and Cuiaba in Brazil.

Easy Taxi’s main competitor is Hailo, an e-hailing startup with roots in London that is now taking on international markets. It is rolling out in New York City and also looking toward Asia and the Middle East for to expand its footprint. Hailo has raised over $50 million to date.

Easy Taxi has the edge in Latin America and is backed by Rocket Internet, a Berlin-based startup incubator that is one of the biggest supporters of e-commerce in emerging markets. Rocket Internet is known for supporting and accelerating clone companies based on popular models like Amazon, Zappos, Seamless/GrubHub, Groupon, and now e-hailing. Rocket Internet also backed Brazil’s online fashion retailer Dafiti (which has raised over $180 million to date) and “Amazon of Latin America” Linio which raised $26.5 million.

The rise of Internet and mobile penetration in Latin America and Asia opens up massive opportunities. Brazil has one of the international hottest startup scenes and will host the 2014 World Cup this year. The World Cup will attract millions of visitors (and their spending dollars) to the region which should be a huge boost for the local economy. However, the Brazilian government has spent an estimated $15.4 billion on the tournament and the extravagant spending (among other things) recently set off protests around the country. Citizens are angry that money is being funneled into the World Cup when it could go toward schools, health care, etc … and the violence is escalating.

Like many emerging markets, Brazil’s political situation is volatile. This does not seem to be stopping Easy Taxi, which already functions outside the Brazilian market. Latin America Internet Holding led this investment.