Mega-successful mobile developers Supercell and GungHo Online Entertainment are teaming up to help each other promote their games. The collaboration will see new content added to Supercell’s Clash of Clans and GungHo’s Puzzle & Dragons. 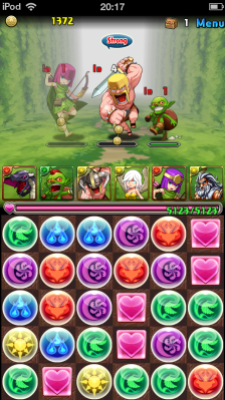 Starting today, Puzzle & Dragon players that log into the game will get six Clash of Clan-inspired monsters to help battle through puzzle-filled dungeons. That includes monsters based on the Barbarian, the Healer, the Goblin, the Archer, the Dragon, and the P.E.K.K.A. samurai-like unit. Each unit is fully playable and has a special evolved form.

In addition to the extra characters in Puzzle & Dragons, GungHo is adding an entire Clash of Clans dungeon where players will eventually face off against The Crimson Dragon, which is a Clash of Clans fan-favorite enemy.

This promotion might get Clash of Clans players to check out Puzzle & Dragons and vice versa.

Not that either game really needs much help. Supercell, which is based in Finland, just finished localizing Clash of Clans for a Japanese audience, and it shot up to the top of that country’s iOS charts after already hovering near the top of the list in the U.S. In April, GamesBeat reported that Supercell raised $130 million in funding and is valued at $770 million.

Puzzle & Dragons is even more successful. In May, the title was making $3.75 million a day. That’s largely due to its popularity in Japan. In that country, nearly 10 percent of the population has downloaded Puzzle & Dragons.