Apple seeded iOS 7 beta 2 to developers this morning, with bugfixes, a new welcome screen, and the return of a very technical and hard-core looking Voice Memos app.

Okay, maybe that’s not the biggest change. iCloud backups have been re-enabled, and starting a new text message when the first has not yet finished sending now works without deleting the first few words of your newest text. So there are likely some more exciting updates. And Siri can still be a woman, if you want.

The option to switch Siri’s gender was announced at Apple’s recent WWDC conference, but it wasn’t available in the first iOS 7 beta. Now Siri has a preference option for “Gender.” And hearing her voice as a him after all these years is definitely a little weird. Not as weird, of course, as asking Siri about the switch: 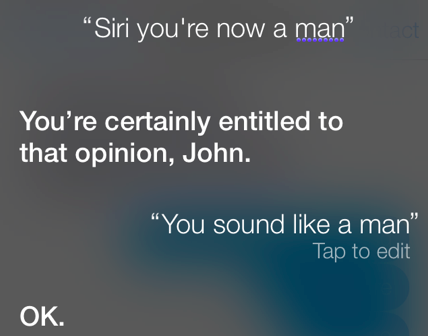 Siri might be a man, but she’s a little conflicted about the switch.

Other new features include Siri seeming to load faster, a slight update to the Reminders design, and quicker Spotlight search. Multitasking also appears to be working better, and a number of interface errors in Music and other apps where text was laid on top of other text seem to have been smoothed out.

I had no idea those Swiss were so troublesome.