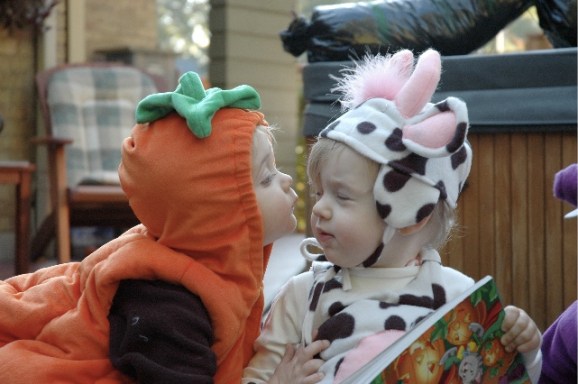 The Montagues and Capulets of the enterprise world are joining hands in the name of cloud computing.

Today, rivals enterprise heavyweights Oracle and Salesforce announced that they are entering a nine-year partnership. Oracle will integrate Salesforce.com with its workforce management software, and Salesforce will offer its cloud products on Oracle’s Java platform, operating system, storage server, and database, according to a report in Reuters.

Oracle and Salesforce (and their colorful leaders) are two of the biggest players in the enterprise tech world. Oracle is a provider of computer hardware and enterprise software products. Salesforce was founded by former Oracle execute Marc Benioff, who left to build what is now a full suite of cloud-based customer relationship management (CRM) software. At the time, Oracle CEO Larry Ellison was a founding investor and member of the board. Then in 2011, Benioff was unceremoniously yanked from the speaker list at the Oracle OpenWorld conference in San Francisco (blaming Ellison in a tweet) and instead gave his talk from a restaurant.

Personal differences aside, the two differed on where computing was going. Ellison said in the past that true cloud solutions were “water vapor” and “idiocy,” but after cloud-computing proved to be more than a fad, he realized that Oracle needed to hop onboard. The giant built an infrastructure-as-a-service solution for customers to deploy and access Oracle Fusion apps in a public cloud or develop Java-based applications. At the time, Ellison said what differentiates Oracle’s public cloud from competing clouds is that Oracle will enable customers to move data more freely. He also fired a serious shot at competitor Salesforce.com by calling it “the roach motel of clouds.”

Salesforce has been a thorn in Oracle’s side for many years, and Oracle has scrambled to catch up after Ellison’s initial dismissal of cloud computing. Cloud architecture is a more flexible, scaleable, cost-efficient, and accessible way to run a large organization, and companies large and small alike are choosing cloud systems. Oracle has made a series of acquisitions to keep up with competitors, announcing 11 purchase agreements in 2012, including SelectMinds, Taleo, Eloqua, Vitrue, and Skire. Earlier this year, it acquired cloud infrastructure management software startup Nimbula.

Acquisitions alone won’t cut it, however, and Oracle is now exploring partnerships as well. Yesterday, Oracle and Microsoft announced a major deal to be more friendly when it comes to enterprise cloud services in an effort to keep more agile rivals down. Essentially, the deal means Oracle software can now run on Windows Server, Hyper-V, and Windows Azure; and Oracle customers will have the freedom to move Oracle licenses over to Microsoft’s Azure cloud or on Hyper-V virtual servers. The two are also working to bring Java support to Windows Azure.

“These moves are also necessary to combat the widespread use of open source alternatives to Oracle’s middleware and database products on these new deployment platforms,” said Forrester analyst James Staten about the partnership.”

As part to the Salesforce-Oracle deal, Salesforce will purchase human capital management software from Oracle, which could signal that it is foregoing plans to develop its own. These announcements came shortly after Oracle’s shares plummeted Friday after the company missed its first fourth-quarter sales on new software in a decade. It was the third miss in the past seven quarters.

Ellison is fighting to keep his “aging IT giant” competitive in a world of young, nimble, quick moving startups. Changing directions is not easy for a company of Oracle’s size and now Ellison has to swallow his pride, eat a bit of crow, and get in bed with Benioff. Now there’s an image for you.