The latest tech startup to attract the interest of Hollywood actor-investor Ashton Kutcher? It’s Invi, a mobile messaging app based in Israel, which has pulled in a $3 million seed round today.

Invi got its start in April when founders Lior Gonnen and Iddo Tal [above, center] set out to develop a new way to bring “everything we love to share directly into the texting conversation,” Gonnen said. 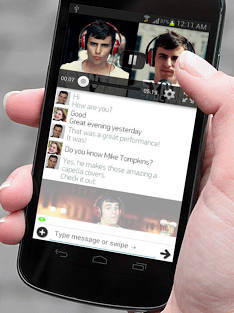 Above: With Invi, you can watch YouTube while texting.

Invi is focused on making the SMS texting experience a bit more interactive and visually appealing. If you’re so inclined, the Invi app for Android (and in the coming months, iOS) will even stream YouTube while texting. And if a friend sends you a news article via Invi, it will appear as a piece of interactive content — not a bland link.

Invi has clearly designed for the hyper-connected, multitasking generation — and inevitably, the millions of people who follow Kutcher (@aplusk) on Twitter. Gonnen describes it as a “full replacement for your native SMS.”

Invi initially had its own messaging service, but today it’s announced that it will support SMS messages on Android phones, a feature that users requested.

Now, you can text people who don’t use Invi at regular SMS rates and chat with other Invi fans for free over a Wi-Fi or cellular network.

Celebrity endorsement aside, one of the greatest challenges facing the team is customer acquisition — although the founders claim they have “several hundred thousand” using the app already. It’s a crowded space with players like Facebook Messenger and WhatsApp.