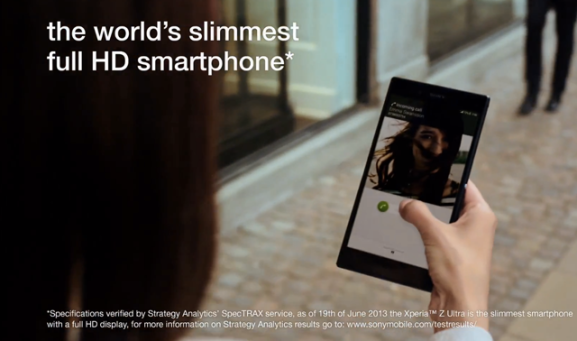 If Sony’s latest device is any indication, gigantic smartphones are here to stay.

The phone —  which Sony announced along with a variety of other, more conservative devices — features a comically large 6.4-inch, 1080p display. It’s Sony’s answer to devices like the Samsung Galaxy Mega, ZTE Grand Memo, and Huawei’s Ascend Mate. And it looks just as silly as the rest of them.

The problem, as the image above so clearly shows, is that the Xperia Z Ultra is so big that it will be nigh impossible for most people to reach the device’s entire screen while they’re holding it with one hand. So while it’s easy to mock these so-called “phablets” for erring too far on the side of screen size ambition, their greater sin is that their size makes them unwieldy for the average person.  And that’s a bad user experience (and something that VentureBeat will discuss at length during its MobileBeat conference July 9-10.)

On the specifications side, the Xperia Z Ultra comes with a 2.2 GHz Snapdragon processor, 16GB of onboard storage, and a 4G LTE radio. The device is also waterproof, according to Sony — though I’m sure most owners are going to end up just taking the company’s word on that one.

The Xperia Z will go on sale in Asia next month and in Europe in September. There’s no word on whether Sony plans to sell it in the U.S.