SAN FRANCISCO — One of the most pleasant surprises today at the Microsoft Build conference is the news that Windows 8.1 will natively support 3D printing.

While the first wave of info is great news for the 3D printing ecosystem, people still had a few questions. Will you be able to just plug your 3D printer and Windows sets it up just like a 2D printer? Are 3D printing companies getting their software and drivers right now for 8.1?

The answer to both questions is yes, GM of Microsoft’s Startup Business Group Shanen Boettcher told me today.

“Plug-and-play for 3D printers will work when we ship 8.1,” Boettcher said. “We’ve got the SDK out to developers now. Now the hardware makers have to do their part and get us the drivers.”

So, yes, as long as 3D-printing-related companies (both hardware and software players) deliver their drivers to Microsoft before 8.1 launches later this year, regular Joe will be able to 3D print from his 8.1-running PC with relative ease.

Boettcher, who was one of the main forces to get 3D printing support included in Windows, said Microsoft sees the alignment with the 3D-printing community as a “huge opportunity.”

“We want to be there early,” Boettcher said. “Our vendors tell us that more than 70 percent of 3D printing is done on the Windows platform already.”

And announcing the new feature at its Build conference makes sense in that end. There are lots of Windows app developers here looking for the next big thing, and so Microsoft is courting them to make innovative 3D printing software.

“We want to get people’s juices flowing around these new types of apps,” Boettcher said. 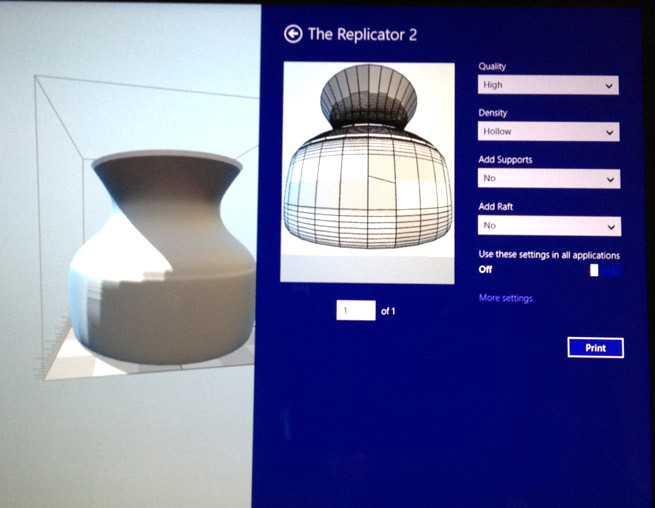 Above: A 3D printing app for Windows 8.1 connected to a MakerBot Replicator.

On top of helping Microsoft get ahead, 3D printing-related companies and entrepreneurs also get a nice opportunity with 8.1. Microsoft said it has already worked with Autodesk, Dassault Systèmes, Formlabs, MakerBot, Netfabb, Stratasys, Tiertime, and Trimble on 8.1 support.

Another 3D printing company I talked to on the floor of Build that was hugely bullish about Windows 8.1 support was 3D Systems, maker of the $1,300 Cube printer.

Rajeev Kulkarni, the GM and VP of consumer solutions at 3D Systems, showed me a Cube [top] hooked up to a Microsoft Surface tablet running Windows 8.1 Preview. It was printing using an 8.1 demo app called Print Preview and appeared to provide a relatively basic but smooth printing experience.

“Having support in 8.1 gets [3D printing] closer to mainstream,” Kulkarni said. “It makes it seamless to get 3D printing in your home.”

Kulkarni said that 3D Systems had spent the past two months working on the software to make Cube work with 8.1. Next up, the company plans to have “several” 3D printing apps ready for the launch of Windows 8.1.