Like its predecessor and expansions, developer Relic’s follow-up continues with its own brand of real-time strategy gaming for PC modeled after World War II. More than just contending with fog of war and juggling unit special abilities, you have to carefully consider line of sight, mobile weapons setup time, line of fire, cover, positioning, destructible terrain, and buildings for digging in. All the while, you have to be constantly planning ahead by capturing control nodes around the map, adapting to your opponents strategies with an informed commander selection, and building up the meager base facilities on offer.

Now add the harsh Russian winters and Soviet commanding officers who will shoot retreating soldiers on sight and you have Company of Heroes 2.

It’s still Company of Heroes … and then some
Relic knows that it’d hit a tactically and strategically interesting formula when it introduced capture points throughout the map that generate resources for players to spend on their armies with the first Warhammer 40,000: Dawn of War game.

This kind of gathering system — standing on contrast to the static base operations common in past genre staples like Westwood Studios’ Command and Conquer series and Blizzard Entertainment’s Warcraft and StarCraft strategy games — places ultimate importance on map control in a much more intuitive way. Company of Heroes 2 brings in a few new ideas that further this concept.

Engineers can now change a generic capture point that provides manpower into either a fuel or ammunition depot, which gives players denied one of those critical resources (needed to call tanks and advanced support squads into the field) a chance to adapt to their circumstances and put up a knock-down, drag-out fight. 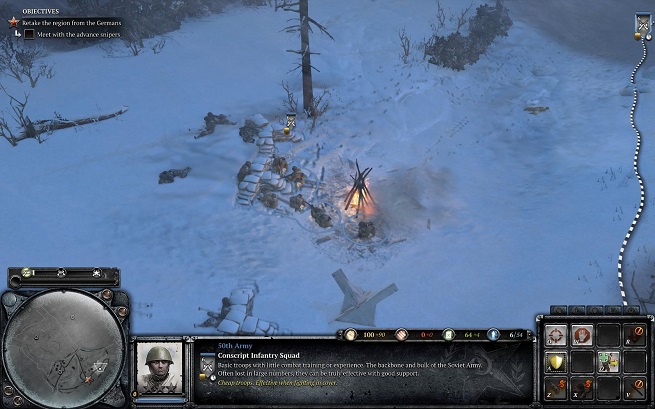 Above: A squad of conscripts warms themselves by a campfire mid-mission.

The bigger change is the additional of weather in the form of the cruel, harsh Soviet winters. When conditions are snowy, the map has a chance of experiencing a blizzard. For 60 seconds, soldiers — with few exceptions — are susceptible to the cold. A thermometer will appear next to the squad’s icon, showing how much time these troops have until they succumb to the freezing temperatures. Additionally, soldiers will move much more slowly through deep snow, increasing the importance of the map’s roads, where travel maintains a regular pace.

Weather elevates the importance of map control, meaning that you can’t really leave soldiers out on their own. It’s a welcome addition, though I wish that Relic had included other types of environmental effects. As it is, this is only in play when fighting on snow maps, which is unfortunate.

The campaign loosens the rigidity of linearity
Company of Heroes 2 structures its Allied forces campaign — focusing on the Soviets this time — through the interrogation of an allegedly insubordinate commanding officer, with each mission “retold” by this central character as he sits in jail. His crime? Having reservations about shooting retreating conscripts as traitors. This adds a bit of welcome context to the string of missions you’ll undertake.

Relic has obviously been paying attention since the release of the Tales of Valor expansion for the original Company of Heroes. At the time, the developer seemed intent on highlighting the RTS genre’s ability to foster a role-playing game within its conventions. The studio’s other big-name series, Dawn of War, would subsequently see a sequel and two expansions going directly down that path, where the player typically guides a handful of soldiers through mostly linear maps with scripted events and enemies. 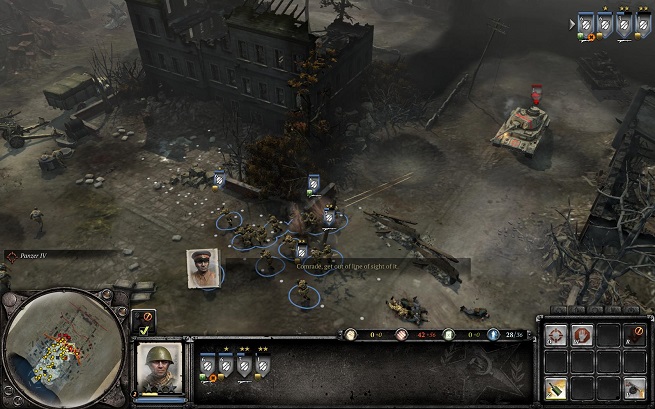 Above: Soviet Shocktroopers have an unfortunate meeting with a German tank.

Company of Heroes 2’s campaign, on the other hand, shows great influence from 1C Company’s tragically underrated Men of War series. Like Men of War, Company of Heroes focuses on pushing the frontline forward, digging into defensible positions, and making tactical gambles that hopefully pay off.

And that bit about commanding officers shooting retreating soldiers plays right into the campaign in a natural way. If you order new soldiers to the field, your CO will issue order 227. While in effect, any troops you order back to base (which you’d typically do to reinforce the squad) will be shot as they approach. This further keeps your focus on the frontlines.

The campaign mostly eschews the game proper, which I expect to be much to the chagrin of a few critics, by almost eliminating the player’s resource management responsibilities. You don’t need grab and hold capture points that bestow manpower, ammunition, and fuel to spend on new squads and tanks. The campaign missions will mostly take care of that for you – you’ll even receive reinforcements at key points free of charge. But this move lets the player instead focus on learning good tactics and become familiar with each unit’s abilities, battlefield roles, and limitations.

More than just a campaign and online multiplayer
Company of Heroes 2 adds a new Theater of War mode, which holds a series of co-op missions, solo challenges, and skirmishes against A.I. opponents. This is in addition to the 14-mission campaign and online competitive multiplayer where you can set up matches of 1-on-1, 2-on-2, 3-on-3, or 4-on-4 against human or A.I. challengers.

Relic has designed both the co-op missions and A.I. skirmishes after historical battles, and a separate percentage bar tracks your progress through the war from 1941 onward. The challenges offer unique situations, like only being allowed to field conscripts and Katyusha Rocket Trucks to eliminate an entrenched German force before a timer counts down or making a last stand as waves of enemies rally to your position.

These offer welcome, bite-sized breaks from the often lengthy campaign missions — perfect for when you’re just looking for a quick tactical challenge without having to sit through the matchmaking service.

Poorly implemented tools for learning how to play
With a game as dense and brimming with options as Company of Heroes, the learning curve can feel exceedingly steep early on, naturally. Relic, unfortunately, just hasn’t given players enough tools to ease themselves into the shoes of a commanding officer. 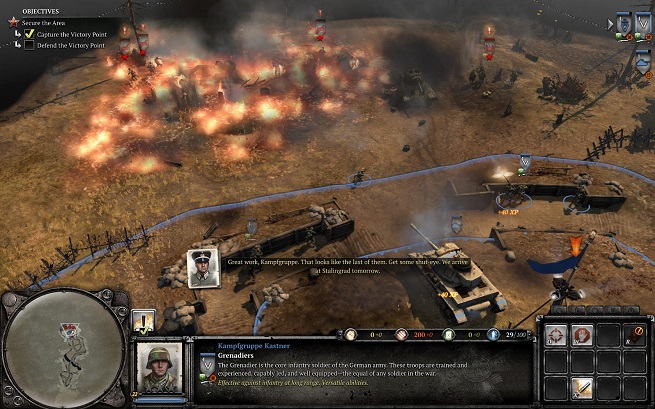 Above: The tutorial mission.

This sequel features a single tutorial mission located within the not-so-obviously named Tactics tab off the main menu. This excursion briefly goes over the basics of RTS games, walking players through simple commands such as right-clicking to move and position squads and pressing keyboard shortcuts to use abilities. Everything else, including base management, build and skill trees, unit battlefield roles, etc., are detailed in explanatory videos. Ugh.

This is much unlike StarCraft 2, which reinvigorated the nearly decade-and-a-half-old RTS series with new-player friendly scenarios and challenges designed to teach tactics through play. Blizzard’s StarCraft 2 campaigns are also designed to guide players through tech-tree and unit-tier advancement, slowly doling out new structures, soldiers, and abilities over the course of dozens of missions.

Company of Heroes just kind of throws you into the thick of it or asks that you watch a bunch of training videos. And even in its campaign, new mechanics are poorly explained if at all. For instance, at one point, the game tells me that I can select a commander, each of which provide five unique abilities, once I have earned a command point. But in the heat of battle, I don’t really have time to read through all the options the three available commanders provide. How can I know which would be a good choice in these circumstances?

With the included Twitch integration, where other players can stream their gameplay sessions, you could learn from watching experienced veterans. But, again, that’s more watching and less hands-on learning, and it’s just not going to be as appealing to newcomers.

Company of Heroes 2 builds on the formula and adds new mechanics with interesting gameplay ramifications. Unfortunately, Relic does a poor job of easing new players into the rules systems. I hope you have the patience to slog through tutorial videos, play skirmishes against easy A.I. opponents, or watch Twitch streams so that you’d can learn the many subtleties of this finely tuned RTS.

Company of Heroes 2 released June 25 for PC. The publisher provided GamesBeat with a Steam download code for the purpose of this review.