The gestures are buried in Apple’s accessibility settings, and are currently only intended, it appears, for use by people who cannot access iPhone’s on-screen controls. Activating “Switch Control” allows a user to attach a left or right head movement to to highlight an on-screen option and select it.

More interestingly, however, this means that Apple has created camera-based gesture-sensing technology which could eventually find its way into apps and the operating system at large.

iOS 7 is beta technology, of course, and so is the head-sensing gesture interface. In my testing, my iPhone very easily lost view of my face if I was too close (less than a foot away) or two far (a couple of feet away). The technology is limited by iPhone 5’s front-facing camera, which is only 1.2 megapixels (compared to the back camera’s eight). 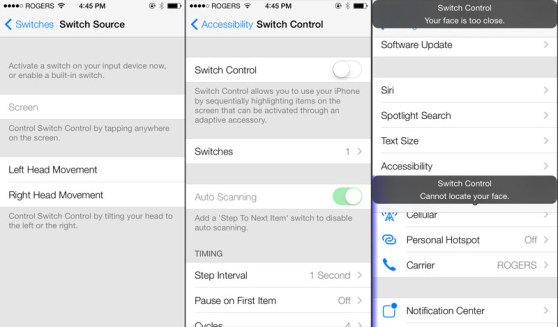 It’s not entirely clear how Apple might incorporate gestures into iOS, and very possible that they will remain simply for the purposes of accessibility. However, the fact that Apple is building this technology raises interesting questions about their use in future Apple TV products, an iWatch smartwatch, or other computing devices.

Currently, the leader in gesture control is Leap Motion, which has 200 times the sensitivity of a Xbox 360 Kinnect, and will be embedded into select HP laptops right out of the box. Leap Motion has focused on Windows-based computers to date, but the company is looking farther afield.

“We’re looking to embed our tech into watches, and smartphones, and glasses, and everything,” COO Andy Miller told me a month ago.

Maybe Apple is too.