Amid a slew of refinements in Windows 8.1, Microsoft didn’t forget about the Windows Store — and for good reason. Judging from what we’ve seen with the success of iOS and Android, and the failure of their competitors, these days an operating system is only as good as its app store.

At first glance, the new Microsoft Store in Windows 8.1 isn’t dramatically different from its first incarnation: The design is a bit cleaner, with more white space and flashier images, and it also highlights app recommendations up front. That’s a particularly important feature for any app store as it grows (Microsoft says the Windows Store is close to 100,000 apps).

Another feature consumers should appreciate: Windows 8.1 apps now update in the background.

Microsoft has also made it easier for developers to make money off the Windows Store. Now there’s support for gift cards, which opens up the store to people without credit cards. Microsoft has also removed the 100-item in-app purchase limit, so developers will be able to offer huge amounts of in-app content to consumers. 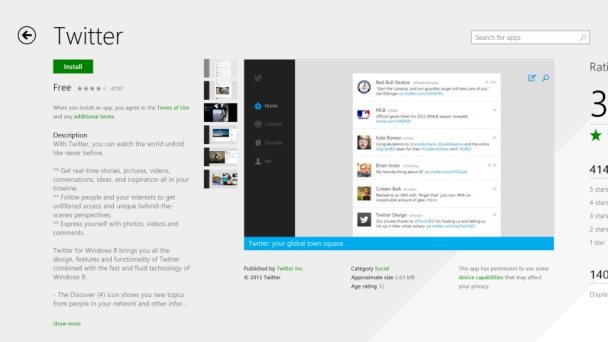 Above: Twitter’s page on the Windows 8.1 app store.

Individual app pages have also been refined [above]. Microsoft says app info has been “flattened,” so you’ll be able to see more information (like reviews and ratings) on the same screen.

We’ll be exploring mobile monetization and developer issues at our MobileBeat conference next month. Grab your tickets now!

Improving the Microsoft Store on the desktop could also help Microsoft’s mobile platform. Since Windows Phone 8 sports the Windows 8 kernel, developers should be able to bring desktop apps over to mobile without much of a fuss. And while there’s not much of a market for Windows Phone 8 yet, the huge Windows 8 market (Microsoft says it has sold more than 100 million licenses) will likely attract plenty more developers over the next year.

Once those devs get used to building Windows 8 apps, it wouldn’t be that tough for Microsoft to encourage them to develop for Windows Phone.