Microsoft released its Windows 8 operating system to the public eight months ago. Since then, Windows 8 has sold more than 100 million licenses, and the company has received a lot of feedback from customers and the tech press.

The company’s remedy to many of your Windows 8 issues is Windows 8.1 (formerly Windows Blue), which it will receive a full release in a matter of months. Windows 8.1 makes a lot of common-sense fixes to the OS, such as adding a remedial Start button to the desktop, more ways to window modern apps, make the Start screen more customizable, and make search better.

While VentureBeat has covered many of the features included in Windows 8.1 prior to today, we thought it would also be important to tell you all the major updates it includes in one place.

Start button on the desktop

Windows 8 includes a Start button on the desktop, something people have been clamoring for. This Start button doesn’t work like the old one, and it essentially just launches your Start screen. But if you get your Start screen configured to launch all the apps you use, it could be a helpful addition.

The Start screen is more customizable. You can add your own photos to the background and choose more color combinations when you don’t have your own photo in place. The Lock screen also lets you include a slideshow of personal photos.

One of my biggest issues with Windows 8 is that “modern apps” only do a 70-30 split when you put two apps side by side. Now you will be able to do a 50-50 split between two modern apps. Additionally, you can do advanced windowing with three or four different apps on the screen next to each other. (For example, having Twitter, Internet Explorer, and Mail apps all sitting next to each other for a big productivity gain.)

Another big issue I have with the original Windows 8 is that its settings panel is incomplete. You often had to dig into the Control Panel via the desktop to find more things you wanted to change. Now Microsoft claims everything is a single place in the new Settings panel in Windows 8.1. Windows 8.1 supports 139 top-level languages and 122 regional variants.

Search in Windows 8.1 has become more advanced. It shows you apps, files, web results, songs, and more in one place. For example, if you type in “Sk,” it brings up SkyDrive, Skype, Settings for SkyDrive, web suggestions, files with that name, and more. Some searches, such as San Francisco or Beyonce, will lead you to rich pages with interactive content. If you search for a song title and tap it, the song starts playing in the background via Xbox Music.

The Windows Store, where you download apps, has been redesigned. It has more white space, more promotional app placement, and better recommendations for apps you might like.

Windows 8.1 includes more interactions with SkyDrive, Microsoft’s cloud storage service. SkyDrive will automatically back up and sync your files across all Windows 8.1.

Xbox Music has been updated with a clean new design. It emphasizes your music collection instead of focusing on music discovery.

Streaming media support for the Xbox One

Windows 8.1 will work with the upcoming Xbox One video game console. You can instantly stream video and music from Windows 8.1 to the Xbox One with a few clicks.

You’ll be able to mirror the screen on a Windows 8.1 device on an HDTV or monitor connected another device with Miracast Wi-Fi streaming support.

Check out more screenshots of Windows 8.1 below. 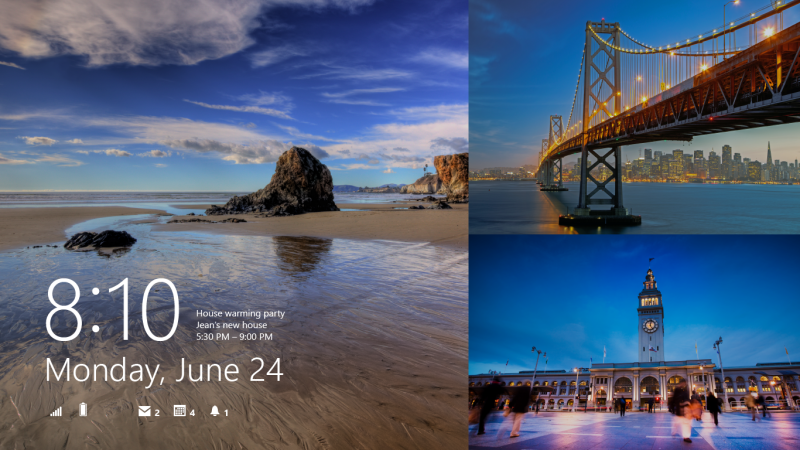