MakerBot, which fell into the arms of 3D printing giant Stratasys last week, was in many ways the embodiment of the Maker movement: It was young, hip, full of ideas, and almost the polar opposite of the company that eventually acquired it.

But many, including Layer By Layer founder Jonathan Schwartz, aren’t confident that MakerBot’s image will survive it being acquired by the 25-year-old behemoth that is Stratasys.

“MakerBot is a very culture-heavy company, so there’s always a chance that it could lose some of that now that it’s a part of a larger company,” he said.

Concerns over MakerBot’s future aside, what’s become clear is that the company’s acquisition is the clearest sign yet that the 3D printing industry is consolidating.

For years, Stratasys and rival 3D Systems have sucked up numerous companies from all parts of the 3D printing world — including hardware, services, materials, and design software. (3D Systems alone has acquired over 17 companies since 2011.)

Does this consolidation, which is many ways inevitable, worry people like Schwartz? A bit.

“This is just two big companies buying out smaller, more innovative companies. It’s a little sad sometimes,” he said. “Maybe it’s a sign that there’s slowing growth and innovation in the market.” 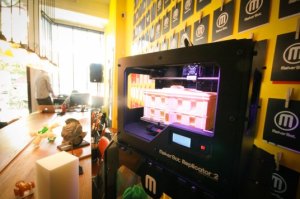 Still, in spite of all these concerns, people like Shapeways CEO Peter Weijmarshausen see the MakerBot acquisition as a good thing for the entire 3D printing industry. “I think the end its great that they found each other. They’re going to power the development of both of their technologies,” Weijmarshausen told me.

Weijmarshausen is optimistic, but others are less so. Acquisitions like MakerBot’s could end up be a bad thing for companies like Layer By Layer, whose service beams 3D design files directly to devices like MakerBot’s Replicator (which is featured prominently on the Layer By Layer’s home page). Could a more corporate MakerBot continue down the road of locking down its hardware — and locking third parties out? It’s certainly possible.

“There is some potential that Stratays could close things down on printers. MakerBot has been hitting open source hard, so that is a bit worrisome for some people,” Swartz said.

While both Stratasys and MakerBot have both stressed that that sort of thing won’t happen, there’s still a palpable feeling in the Maker community that MakerBot has sold out. And it’s that perception — however unwarranted — that could end up being the most damaging to MakerBot down the line.

Hints of this shift in attitude are already apparent. Well-known 3D designer Asher Nahmias (also known as “Dizingoff”) recently pulled his designs from MakerBot’s Thingiverse community after accusing the company and its new owner using his design files for commercial purposes.

“These corporations, including Makerbot, are in it for the MONEY,” Nahmias said last week, effectively summing up much of the community reaction to MakerBot since the acquisition.

Personally, I’m torn about what the move means. While the Stratasys acquisition is obviously good for MakerBot’s future, I still would have liked to have seen MakerBot find its own, independent road into the big time. Sometimes the Apples of the world should just chart their own course.