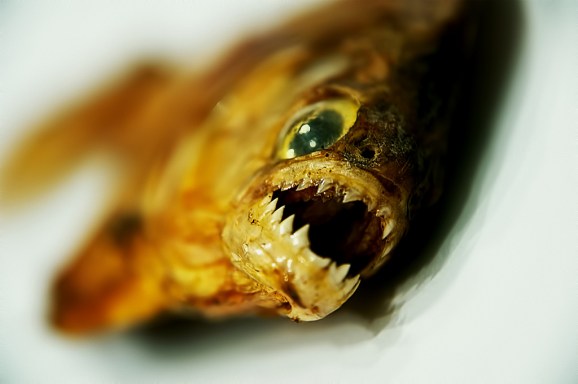 In the $5 billion enterprise performance management market, upstart Host Analytics is tripling revenue, winning clients like Tesla, Pandora Radio, Groupon, Crocs, and Marketo … and promising a 75 percent savings in total cost of ownership versus the incumbent.

Yeah, that would be Oracle.

“Larry Ellison has done a lot of hand-waving about the cloud,” chief executive Dave Kellogg told me this morning. “But I haven’t seen any traction for Oracle moving any existing products into the cloud. They’re trying, but their customers are getting there faster than Oracle is.”

Host Analytics is in that sometimes mysterious and amorphous chunk of the enterprise market known as enterprise performance management or business performance management: planning, financial reporting, analysis, and monitoring. In other words, all the “fun” stuff that people who actually liked math in high school work on. The problem is that this is often the last part of the business to benefit from new technology.

Which is precisely what gives Host Analytics an edge. 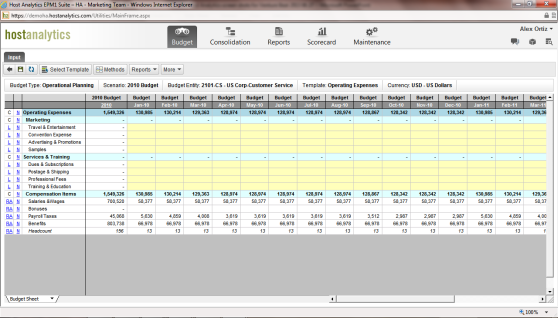 “Finance is last in line for IT support,” Kellogg says. “They’re not getting the attention from IT like sales and marketing.”

This means that a hosted platform with minimal integration is a good place to be. In an industry where sales cycles  historically ran into the better part of a year, contracts were a minimum of seven figures, and integration took many months, Host Analytics’s pricing and product enable a several-month sales cycle, a two- to three-month deployment time frame … and a five- to six-figure price tag.

“The average cost for a first-year customer is $100,000,” Kellogg told me. “For smaller companies, that might be $30,000, and we’ve done deals into the multiple hundreds of thousands, based on the number of seats a company needs.

For Kellogg, who joined Host Analytics just five months ago, this is not the first time at the enterprise rodeo. He previously helped Business Objects jump from a $40 million to $1 billion company. And when Salesforce began eating Siebel’s lunch, Kellogg started sleeping with the enemy and built a billion-dollar cloud business for Salesforce.

Since he’s joined, Host Analytics has tripled revenue, although he refused to take credit. 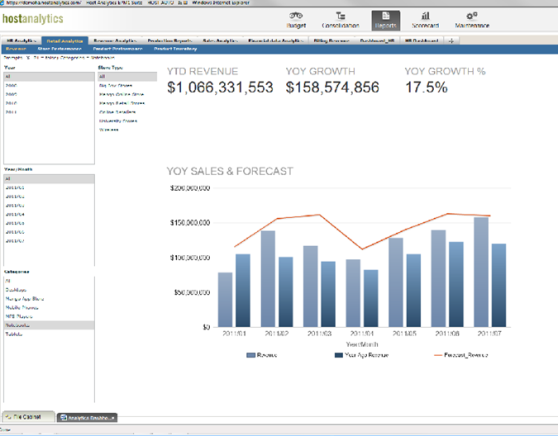 “It didn’t all start when I got here,” Kellogg told me. “We’re seeing more large household names come on board, like Tesla, Pandora, Marketo … we’re seeing a lot of action among bigger companies.”

That’s because it doesn’t matter how big or small you are — long integration struggles and year-long ROI cycles suck. And Oracle isn’t, in Kellogg’s opinion, switching to cloud fast enough. It doesn’t happen overnight, he says, and there’s a big Innovator’s Dilemma problem too:

“You don’t have the sales channel, partnerships, ecosystem,” Kellogg explains. “Even if you can flip the switch and have the right product right away, it’s hard for a leopard to switch its spots. Oracle is just simply off the charts in expenses, maintenance fees, and upgrades … we’re one of many cloud piranhas that are taking a bite out of Oracle.”

Tomorrow, the company is unveiling a new product and software suite to accelerate those bites. It’s a migration program from four of Oracle’s Hyperion business applications to Host Analytics, allowing current Hyperion users to migrate data models, templates, and reports directly into Host Analytics, a migration methodology based on dozens of real-life experiences, and a training program for new Host Analytics customers.

A big part of the company’s migration capability is Excel integration. 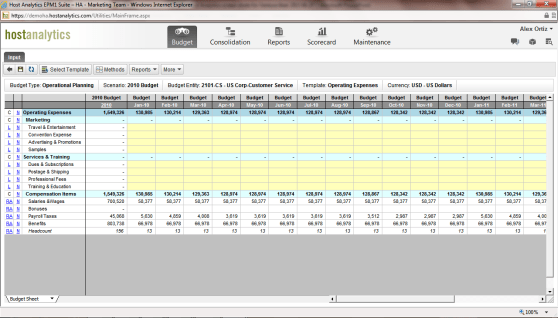 “Excel is both friend and foe,” Kellogg says. “For a lot of companies it’s the first place you go, but the company just grows and grows and grows … and you end up with 92 tabs and 60,000 rows.”

That’s a nightmare or a masterpiece, depending on your perspective, but the fact is that version control, security, access control, compatibility, and teamwork are massive issues in that environment. So Host Analytics, Kellogg says, brings the best of Excel without the worst of Excel, by allowing imports, exports, and integrations for those companies who still use Excel to run their business.

I asked Kellogg about the ROI of Host Analytics.

One company, Thule, is saving a million dollars a year thanks to inventory insights that Host Analytics highlighted for executives. Another, Otis Spunkmeyer, expanded its corporate planning process to 125 people from 25 in order to broaden perspective and give division leaders more ownership of their business, thanks to sharing and centralization features.

But a big chunk of the ROI is something that may not obviously hit a balance sheet.

“The first return on investment is that they reduce the time spent creating a plan, making a budget, or closing the books at the end of a fiscal period,” Kellogg told me. “For example, some companies have taken their close time from 15 days down to five days.”

That’s significant, not just for the time savings, but for the ability it gives to finance and accounting to spend less time figuring out the numbers, and more time analyzing what they mean … and how the business could improve. That’s huge, and those of us who have worked in mid-size and large corporations can imagine what relative freedom from the ever-present month-end and quarterly period closes could do for finance executives.

All of which means, Kellogg believes, that Host Analytics is well set up to win more than its fair share of business from Oracle.

Even if it means taking old-school accountants out into the brave new cloud world.

“Finance buyers are more risk-averse than sales and marketing people,” Kellogg agrees. “But there is a path through the woods, it is safe, and we’ve taken a lot of people there.”

Correction: CEO Dave Kellogg’s name was spelled incorrectly in an earlier version of this story, and he did not previously work for Siebel Systems. Also the cookie company is Otis Spunkmeyer, not Otis Funkmeyer. We’ve updated the story.