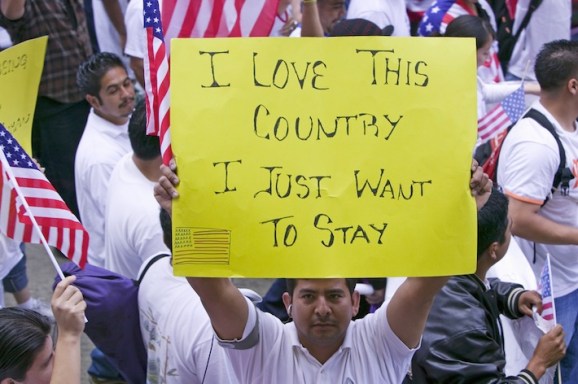 Major immigration reform measures passed through the Senate today — the start to one of the largest changes to U.S. immigration law in many years.

The bill, which adds to current border security measures and introduces a new way for existing illegal aliens to gain legal status, was approved at a vote of 68-32, including 14 Republicans, as noted by the New York Times. The changes were authored by eight senators from both parties.

The start to immigration reform is a big deal for startups in addition to the individuals in this country hoping to see change before deportation. Silicon Valley has long dealt with valuable employees having to leave the country, or having difficulty even entering the country, because of visa issues. In May, a virtual protest in support of immigration reform called March for Innovation was created. At the time the organization said:

“America can’t afford to fall behind in the race for global talent — a race we’re already losing. Already, other countries have incentivized innovation and encouraged startups while we make it difficult for talented immigrants to even apply for a visa.”

A number of well-known tech influencers started a public advocacy group called FWD.us with the goal of easing up immigration laws so as to attract better tech talent. Those involved include Mark Zuckerberg, Reid Hoffman, Marissa Mayer, Mary Meeker, Ron Conway, and more. Zuckerberg invited people to thank the Senate and wrote this on his Facebook Timeline:

When we launched FWD.us, I wrote about my own experience teaching middle schools kids and seeing some of them face an uncertain future because they were living here undocumented, having been brought to the US as young children. While immigration is important for our economic future, it is also fundamentally an issue of who we are as people.

A lot of work remains before reform becomes law, but today’s vote shows that politicians from across the spectrum can come together to vote for reform that will move our economy forward and honor our history as a nation of immigrants.

But while the Senate is in agreement that there needs to be something done about immigration, the House is not as willing to bend to these changes. Speaker John Boehner has already expressed that the House would rather write its own version of the bill.