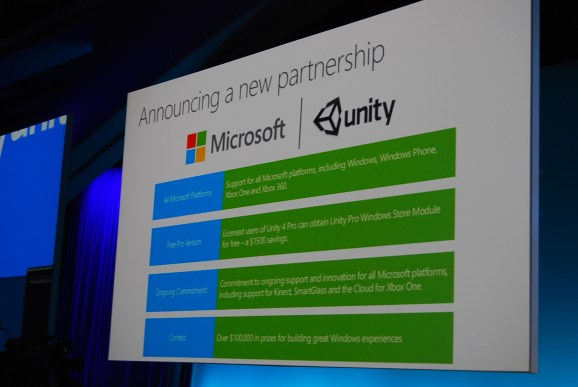 Microsoft is getting a lot of heat from the indie-gaming community for not permitting developers to publish their own games. The company made something of a peace offering today, not by reversing that stance, but by announcing deep integration with the popular Unity graphics engine.

During the company’s Build developer conference in San Francisco, Microsoft revealed that it is partnering with Unity. Studios using the engine can quickly port their games to Windows Store, Windows Phone, or Xbox One.

“Unity has established itself not only as an incredible development toolset and engine but as a significant force for creative freedom and innovation in the games development community,” Microsoft chief evangelist Steven Guggenheimer said. “With Unity’s commitment to support Windows 8, Windows Phone 8, Xbox One, and Xbox 360, Microsoft’s gaming ecosystem will benefit from the wealth of ideas and imagination flowing from the Unity games development community.”

Unity will also develop tools that will quickly enable studios to add Xbox One functionality to their titles. That includes Kinect gestures, multiplayer matchmaking, SmartGlass support, and cloud functionality.

Developers will still have to find a publishing partner if they want to release these Unity games on Microsoft’s console. That’s opposed to Sony or Nintendo’s digital platforms where developers can just release games as their own publishers.

Xbox 360’s Xbox Live Arcade soured a lot of smaller developers who dislike the publishing system, but Microsoft doesn’t seem to concerned about changing it. This is despite a major backlash from studios flocking to PlayStation 4. That includes Braid developer Jonathan Blow, who is releasing his next game on PS4 and not Xbox One.