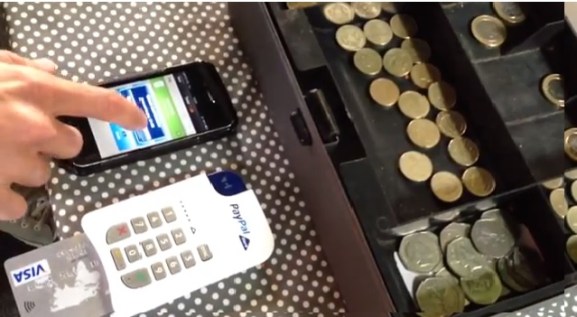 PayPal Here launched to much hype last year in the U.S. (Disclosure: I own stock in PayPal parent $EBAY.) The product, a triangular dongle, allows small merchants to take credit cards in the United States. It was very much a catch-up move by the payments giant to compete with San Francisco-based Square.

Now PayPal is leaping ahead with an EMV version of its PayPal Here reader, which is a better fit for many international markets. I was recently in London and had the chance to get a demo from PayPal’s Narik Patel, director of mobile merchant services. You can see a video demo here:

Some context for U.S.-based readers: although magnetic stripe is the predominant technology in the U.S. for credit cards, that’s not the case in much of the world. In Europe, Chip and PIN is dominant. Each credit card has an electronic chip on it. In order to authorize a transaction, the customer slides the card into the chip reader and then enters a 4-6 digit PIN. This has the effect of significantly reducing fraud.

Chip and PIN readers require much more complex hardware than the magnetic stripe technology used in the U.S. This makes life a bit more difficult for vendors of payments solutions.

As a result, the devices aren’t free. Patel said he expects the device to be sold for £99, or roughly $150.

“PayPal doesn’t make any money on the sale of the devices, but it will be one of our merchants’ main tools, so every single detail counts,” Patel said.

The reader and its packaging are beautifully designed. “The number of iterations the hardware has gone through is in double digits as we wanted to make sure it was as intuitive as possible as well as having that ‘premium’ PayPal branded look and feel. The blue back has gone through at least eight versions to get to the blue finish we wanted,” Patel said. “We have also stress tested it under several conditions – drop, number of card reads/inserts, battery management, how easy it is to press any key on its keyboard, etc.”

The device connects to a phone using Bluetooth. Setting up Bluetooth is often a sore spot, even for experienced users. PayPal built a nice tutorial to help guide customers through the process.

The reader is currently in testing at the Greedy Goat ice cream stand in London’s Borough Market. (I highly recommend their raspberry chili ice cream.) A number of merchants near PayPal’s London offices are also testing it.

It’s a small but important step and shows that PayPal president David Marcus is intent on reforming the commonly held belief that PayPal is slow and bureaucratic. Marcus is personally involved in design reviews, Patel said. PayPal’s move may become even more important as rules in the U.S. change over the next several years and the U.S. moves closer to the European model.

I will be discussing what’s next for PayPal with CTO James Barrese at MobileBeat in San Francisco July 9-10.