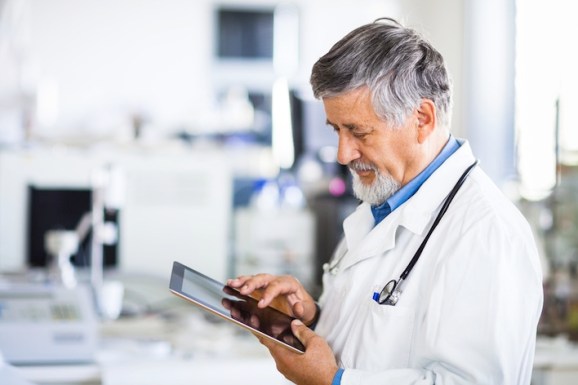 Patients are in the dark about the costs of health care, which vary wildly between hospitals and clinics.

As our editor put it, it’s like walking into a flea market where you don’t know the price of anything until after you’ve bought it.

Silicon Valley companies see a possibility to bring much-needed clarity and transparency to the system. One such startup is PokitDok, which received $4 million in funding today to build-out a website that lets consumers research and potentially even purchase health care services.

PokitDok was founded by Lisa Maki (right) a former Microsoft employee, who hit on the idea while recovering from a spinal injury. Maki spent six months exhaustively researching various options for treatments, and finally uncovered an experimental treatment in South Carolina. She’s now pain-free, and is determined to help patients more easily discover the optimal course of treatment.

Maki has spent the past several years reaching out to providers. On PokitDok, physicians and other care providers can set up a virtual storefront to market their services, whether it’s traditional medicine or alternative healing.

Since getting started in 2011, PokitDok claims that over 1000 practices — including primary care and surgical centers — have signed up to the beta. The country’s largest physician network United Physicians is using PokitDok to publish prices, and lets patients directly book and pay for appointments. This will very likely prompt more clinics and physicians to follow suit.

In certain respects, PokitDok is competing with Practice Fusion, the San Francisco-based electronic medical records company, which raised $34 million last year. Practice Fusion recently launched its consumer-focused website for patients to book appointments and browse doctor reviews. In addition, ZocDoc is working on the problem of a lack of transparency in health care, and recently experienced a 200 percent bump in bookings for its online doctor appointment service.

Venture investors believe that several startups can be successful in this space. As new PokitDok investor John Backus puts it, a consequence of the Affordable Care Act is a “rush by consumers and businesses to adopt high deductible health plans with low monthly premiums.” As a result, consumers will increasingly need to spend their own money before insurance coverage kicks in.

Consumers  “will start taking a vested interest in finding and evaluating medical providers, costs and quality in a country that already spends $2.6 trillion on healthcare,” said Backus of New Atlantic Ventures, who will join the company’s board. The hope is that these digitally-savvy patients will turn to companies like ZocDoc, Practice Fusion and PokitDok.

The funding was led by New Atlantic Ventures and syndicated with Rogers Venture Partners. Seed investors Subtraction Capital, Zac Zeitlin and FFP Holdings also participated in the round.