San Francisco-based Tomfoolery raised $1.7 million in January but Anchor is the first app the company has shown to the world. The company has the tagline “Work Awesome.”

The new Anchor app will compete directly with enterprise social networks such as Microsoft’s Yammer, Salesforce’s Chatter, Jive Software, and Tibco’s Tibbr. But unlike those, Tomfoolery is taking a mobile-first approach and does not emphasize things like productivity tools or document sharing. Instead it focuses on communication between individuals and groups.

“Our focus is on making beautiful tools people actually want to use,” Tomfoolery cofounder Sol Lipman told me. “If Yammer is ‘Facebook for enterprises,’ we see ourselves closer to an Instagram or a Path for work.”

While Anchor faces stiff competition, Tomfoolery cofounder and CEO Kakul Srivastava, a former Yahoo VP that helped grow Flickr to more than 50 million users, said she sees a wide-open market. Srivastava said a recent study she saw showed Facebook was by far the most common app for workers to collaborate with, and that Yammer, Chatter, and the others were still lagging in real usage.

“People say ‘work isn’t supposed to be fun’,” Srivastava told me. “We intend to change that paradigm.”

With it’s “mobile-first” attitude, Anchor has been designed for the iPhone and the web. That said, the iOS experience is much more robust. (Take a look at the desktop app below.)

Additionally, the company has been working on Android and Google Glass applications for Anchor. It expects those apps will be available in the next few weeks.

Two underutilized business areas that Srivastava and Lipman believe Anchor could be a hit with are small businesses and retail.

After Anchor is fully launched, Tomfoolery has plans to build more “fun” business apps. Lipman said the startup is looking at fitness and calendaring as options. 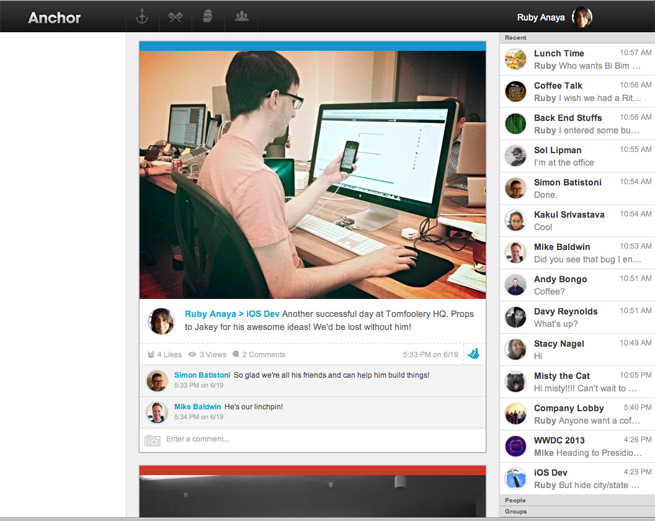 Above: Screenshot of Tomfoolery’s Anchor app on the desktop