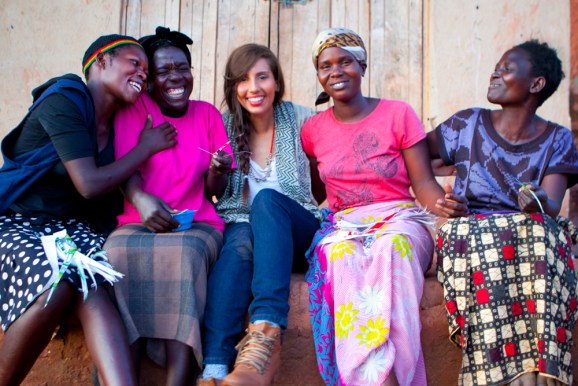 In honor of San Francisco’s Pride weekend, L is teaming up with Uber to deliver free condoms.

L is a a “condom company with a cause.” The company manufacturers condoms with high-quality, sustainable materials and packaging that doesn’t smack of machismo. For every condom sold, it distributes one in a developing country. It was founded by Talia Frenkel, a photojournalist who witnessed the effects of HIV/AIDS on women and girls while working for the Red Cross. She was inspired to build a company to tackle this preventable and devastating epidemic.

“There is a huge lack of innovation in the condom market here,” she said in an interview with VentureBeat. “Walking down the condom aisle feels like walking into a battlefield. Forty percent of condom purchases these days are made by women, but condom marketing is all about male bravado. Why isn’t there a product for more modern sexuality?”

Frenkel set out to build a more female-friendly condom, one that doesn’t involve potentially harmful additives and is made using high-quality ingredients. She also dedicated a lot of energy to the branding and design that was mindful of cultural mores and barriers, and conveyed a different message than competitors. She also relied on digital channels to build on a strong community of supporters.

“Condoms have always been an uncomfortable purchase, so the online distribution approach works really well,” she said. “The other people in this space are billion-dollar corporations, so being able to have a strong website, tell a story, and share a story, and get people to become ambassador for a cause has been invaluable to launching L.”

Social entrepreneurship is at the core of Frenkel’s business. The Office of the Global AIDS Coordinator (OGAC) found that nine out of 10 countries in Africa have no access to condoms for two to three month at a time. Five thousand new HIV transmissions take place every day, and 4,000 people die of AIDS every day. Frenkel said that women and girls are increasingly becoming the face of the AIDS epidemic. Condoms are a cornerstone of HIV/AIDS prevention efforts, but they are not always accessible, and even in areas where there are relief/ mitigation efforts, condom stock-outs are far too common.

L is attempting to bring these numbers down by working with nonprofits to distribute condoms in high-impact, impoverished areas “where it is not uncommon for sex to be sold at a price lower than that of a single condom.” The company has also developed income-generating activities for women, where they can get trained as health workers and earn money by distributing condoms in their communities and supports sex education initiatives in Africa.

Jason Green is a partner at Emergence Capital Partners and an active proponent of social entrepreneurship. He said that this is still a nascent sector and he predicts it will become a significant part of the startup ecosystem.

“People are beginning to realize that there are big problems in the world, and there are ways to solve them without relying on big government or corporations,” he said in an interview. “This is a new way of building an organization for the long haul that can have a positive impact.”

A couple months ago, the Bill and Melinda Gates Foundation said it would give a $100,000 grant to whomever could invent a “next-generation condom.” Gates said that condoms have been in use for about 400 years and have undergone very little technological improvement in the past 50. This is clearly an area that is desperate for innovation, and Frenkel is trying to change attitudes at home and abroad when it comes to topics of gender and sex. She is committed to promoting women in leadership roles.

“When a condom company is founded by a women, and when its a women-owned social enterprise that benefits women globally, it presents an interesting angle to conversations happening about gender,” she said. “Why are less than 5 percent of startups that receive venture capital run by women? And with over 80 percent of consumer products purchases coming from women, why aren’t there more consumer products companies owned by women? L stands for challenging existing ideas and believing in women as catalysts for change and development.”

Sales are (of course) a key part of L’s mission, and the company is not in the habit of distributing the condoms for free. However Frankel met an Uber community manager at an event who was familiar with the company, and they began joking about possible collaborations until they realized that there was a genuine opportunity to work together. The “Safe Rides For a Better World” initiative will last for the weekend and distribute free rides and condoms.

“Uber stands for luxury and safety which L tries to be too,” Frenkel said.

L condoms are currently available in CVS stores in California, boutique stores around the country, and available online. The company even offers a subscription service where people can get regular deliveries and discounts, which has been popular with fraternity and sororities. L is based in San Francisco.