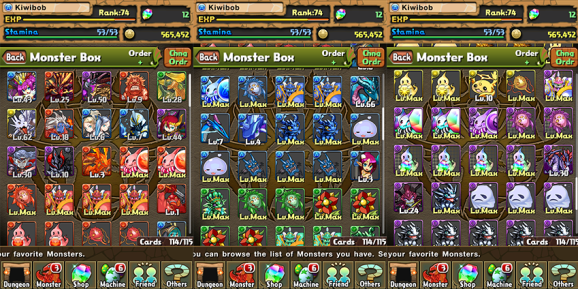 Developer GungHo Online Entertainment generates around $2.5 million every day with its mobile role-playing game Puzzle & Dragons. Earlier this week, designer Ramin Shokrizade wrote a blog for Gamasutra explaining some of the methods that helps the Japanese developer “coerce” players into spending big money.

Shokrizade went over several concepts like premium currencies, reward removal, and hard boosts. He claims that these techniques help the developer obscure information that the brain would normally use to decide against making a purchase.

Developers such as GungHo and King apply these methods in moments that cause “fun pain,” which the designer defines as a moment when the game makes a player “uncomfortable” and gives them the opportunity to pay to get out of it.

“The ability to weigh this short-term pain relief versus the long-term opportunity costs of spending money is a brain activity shown by research to be handled in the pre-frontal cortex,” writes Shokrizade. “This area of the brain typically completes its development at the age of 25. Thus consumers under the age of 25 will have increased vulnerability to fun pain and layering effects, with younger consumers increasingly vulnerable.”

Puzzle & Dragons starts out as a game of skill. Players feel good, Shokrizade writers, because they believe they are making progress based solely on how well they play. Over time, however, it slowly morphs into a pay-to-win game, or a “money game.”

“If the shift from skill game to money game is done in a subtle enough manner, the brain of the consumer has a hard time realizing that the rules of the game have changed,” writes Shokrizade. “If done artfully, the consumer will increasingly spend under the assumption that they are still playing a skill game and ‘just need a bit of help.’ This ends up also being a form of discriminatory pricing as the costs just keep going up until the consumer realizes they are playing a money game.”

Developer can delay that realization using premium currencies. If you’ve ever played a free-to-play title, you’ve probably noticed they use special currencies like gems or power, and that you can purchase more of that with real money. Everything else in the game you can only buy with the gems.

Games do this because users don’t associate financial anxiety to these stand-in currencies.

“If real money was used — no successful game developer does this — then the consumer would see their money going down as they play and become apprehensive,” writes Shokrizade. “This gives the consumer more opportunities to think and will reduce revenues.”

The designer also describes how Puzzle & Dragons obscures the way its monster-merging system works so that players don’t realize they can’t get the best stuff until after they spend a significant amount of money.

Players can purchase random rare monsters for $5, which makes the game easier — but gamers can also get to even more powerful creatures by merging together those premium monsters.

“Thus the best hard boosts in these games [like Puzzle & Dragons] typically cost thousands of dollars, a fact that is hidden to the user until they are already invested for at least a few hundred dollars,” he writes. “This puts the consumer in the difficult position of giving up and losing the equity already purchased, or going ‘all the way’ and spending some unknown large amount to get the top boost.”

Shokrizade also points out Puzzle & Dragons’ state-of-the-art reward-removal techniques. In the game, players battle through dungeons and at the end they will face a tough boss. A lot of the times, players will die on the boss, and the game will threaten to take away every single item they earned in the dungeon unless they pay $1.

“To the brain, this is not just a loss of time,” writes Shokrizade. “If I spend an hour writing a paper and then something happens and my writing gets erased, this is much more painful to me than the loss of an hour. The same type of achievement loss is in effect here. This technique alone is effective enough to make consumers of any developmental level spend.”

It’s scary stuff to realize that free-to-play developers are designing something to get the most out of the player rather than to give them the best experience.

This doesn’t apply to all free-to-play games. Shokrizade points out that skill games, which he makes, can use much more respectful techniques to encourage spending. Examples of that might include developer Riot’s League of Legends competitive game.