In the creation of the PlayStation 4, Sony took the unprecedented step of entrusting its crown jewel to a game developer who is a consultant, not a full-time employee of the company.

Mark Cerny is a seasoned developer with decades of experience producing blockbuster Sony games such as the Crash Bandicoot series, Spyro the Dragon, and Jak & Daxter. But in all of his time working closely with the Japanese company, he was never an employee. Since 1998, Cerny has worked on his own as a consultant at Cerny Games, according to a speech he gave at the Gamelab 2013 conference in Barcelona, Spain. The speech offered unique insight into the design of the PS4, Sony’s next-generation game console that debuts this fall.

The fact that Cerny is a consultant seems like a tremendous risk for Sony, given the secrecy involved in designing a project like the PS4, which represents the future of the whole company. But it’s no surprise once you learn more of the details. In fact, getting Cerny to design the PS4 — a move that Cerny attributed to Shuhei Yoshida, the head of Sony Worldwide Studios — could turn out to be one of the best decisions Sony has made in a long time. 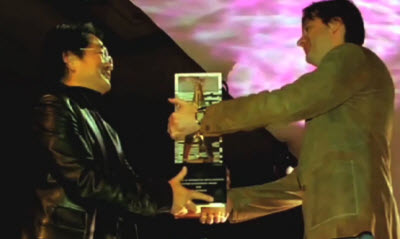 Cerny was the youngest employee at Atari when he joined at age 17. He has been making games for 31 years and worked on 30 games during that period. Most of the titles he worked on were first-party games, and many of them pushed the edge of what was technologically possible at the time.  He also worked at Sega and Crystal Dynamics. But his ascendancy really began when he became an executive and then head of Universal Interactive Studios in 1994. He began producing games for the brand-new Sony PlayStation and worked with fledgling studios like Naughty Dog on the game Crash Bandicoot and Insomniac Games on Spyro the Dragon.

In 1998, Cerny left Universal to start Cerny Games, and he continued to produce games as an outside consultant. Sony bought Naughty Dog, and Cerny continued to work with the developers who were part of the PlayStation universe. Cerny was always technical, and he had experience writing real-time game engines, which enable games to run on console hardware. He was also fluent in Japanese, which enabled him to communicate with hardware engineers and software creators in Japan or the U.S.

Ken Kutaragi, the Japanese father of the PlayStation, was commander-in-chief of Sony’s game business. Under Kutaragi, Cerny worked closely with Andrew House, a Brit who headed third-party developer relations for the PlayStation, and Yoshida, who ran Sony’s game development in the U.S. and later around the globe. Yoshida asked Cerny to help lead a team dubbed ICE, whose job was to create code for the upcoming PlayStation 3 game console.

During the summer of 2003, Cerny went to meet the PS3 hardware engineering team. They gave him a test, asking him to program something for their Cell processor, which was still in development. He was able to figure out how to make programs run on the Cell, so they let him join the team.

Later on, many other developers complained that the Cell was too complicated. Cerny didn’t have the power to change that chip, but he took the lesson to heart. In early 2005, Sony was just starting to tell third-party game developers how to make games for the PS3, but there were no tools available for software programmers to create those games at the time. Sony hadn’t made them yet. I recall running into Cerny at the Electronic Entertainment Expo video game trade show in June 2005. He was having a heated discussion with Jim Kahle, an IBM fellow and architect of the Cell processor. I can imagine what they were talking about.

“I just stayed focused on how to best use the chip that had already been designed,” Cerny said. It was exciting because everything was so new, but it was scary because it was so hard to do even basic tasks via programming.

After the PlayStation 3 had a difficult birth and went out at too high a price at $599 in 2006, Kutaragi’s fortunes tumbled within the company. He was forced into retirement after three decades in 2008. At that time, Cerny gave him the game industry’s top honor, a Hall of Fame award from the Academy of Interactive Arts & Sciences, at the annual DICE Summit industry event. For the first time, there was a void within Sony. Kutaragi was no longer there to lead the design of the next game console.

Cerny said he “knew it was a bit audacious” but approached Yoshida about filling the role anyway. Yoshida thought it was a great idea for Cerny to become the architect of the PlayStation 4 even though he wasn’t an employee. After all, Cerny could talk the same language as hardware engineers but also carry with him the concerns of game developers. With Yoshida’s help, Cerny got the job. Other Sony executives, including Masa Chatani, then chief operating officer, agreed that Cerny was the right person for the job.

After all, he could speak fluent Japanese. He didn’t mind traveling. He had been an executive producer of blockbuster games. He had programmed game engines. And he had long worked with Japanese game companies for a long time.

“I had the expertise the make a bigger contribution,” Cerny said.

Cerny said that his role as a consultant was ideal even though he wouldn’t have the same absolute powers that Kutaragi had.

“As a consultant, I did not manage employees,” he said. “I was not responsible for budgets. I didn’t give presentations to other Sony groups. I didn’t track progress on milestones. I didn’t negotiate contracts.”

In other words, he could focus on doing the work, communicating with groups inside and outside of Sony. It was like being the director on a game rather than a manager (responsible for employees) or a producer (in charge of the budget).

“The director’s role is to shape the shared vision and communicate it,” he said. “I’m free to think about where we need to be in five years.”

If the PS4 is a success, Cerny will get the credit. If it isn’t, well, he’s just a consultant. He is creating his own PS4 game, dubbed Knack, which takes advantage of the graphics power of the machine. At the moment, with Sony enjoying a lot of accolades for the PS4 and its plans to launch the machine later this year, Cerny is looking like the next Ken Kutaragi.