With its new Reserve product, Groupon is transitioning away from being just a daily deals site.

Diners can use Groupon Reserve to book tables at fancy restaurants for a discounted rate (up to 40 percent), no pre-payment required. For restaurant-owners, it’s an opportunity to fill tables on slow nights, a big boost for business. Well-known eateries like Le Cirque in New York City, Chaya Brasserie in Los Angeles, and db Bistro Moderne in Miami have already signed up. 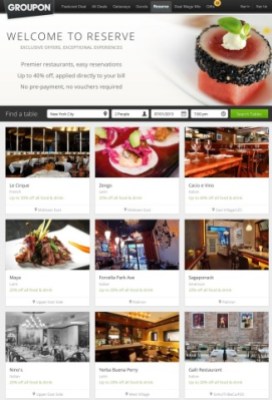 Groupon Reserve isn’t just catering to restaurants, although that’s the initial area of focus. The website will also offer discounts for high-end spas, hotels, and salons.

Groupon Reserve was first tested on consumers in Chicago in May. The product has been under development for about a year and is part of the impetus behind the acquisition of Savored.com, a New York-based reservations and dining discount startup. The program will use Savored.com’s reservations engine.

With this new product, Groupon is targeting well-heeled consumers with spending power. In a statement, the Chicago-based company described Reserve as a destination for the “finest things to eat, see, do, and buy.”

Groupon fired CEO Andrew Mason in February after losing a fifth of its value and reporting disappointing quarterly losses. Mason was subsequently replaced by Groupon’s Executive Chairman Eric Lefkofsky and Vice Chairman Ted Leonisis. Lefkofsky said in a statement Monday that the management team intends to push the company in a new direction: “upscale offers and exclusive experiences.”

“Reserve gives the most prestigious brands a new way to reach our large and desirable audience,” Lefkofsky continued.

The previous version of Reserve was invitation-only. As of today, the product will be accessible through a tab on the company’s website. It’s a new marketing model: Rather than pushing deals to consumers, Groupon hopes to pull people in with the new time-stamped discounts and reservations service.