Point-and-click graphic adventure games are making a comeback thanks to crowdfunding website Kickstarter. Moebius, the latest project of veteran game designer Jane Jensen and her new studio, Pinkerton Road, is one of the more high-profile titles to receive funding.

Moebius is considered a spiritual successor to one of Jensen’s earlier works, the Gabriel Knight series, but those looking for some of that franchise’s paranormal hijinks might be a little disappointed. Moebius is a “metaphysical thriller,” Jensen said, a game more about philosophy and space-time than werewolves and vampires.

“There’s a lot of layers to it,” she said. “And as you go further along, you start to realize that things are much deeper than they appear to be initially in terms of the main character and the overarching story.”

The main character is Malachai Rector, an antiques appraiser with a genius-level 175 IQ, a Ph.D in history, and a photographic memory. He’s hired by an organization called F.I.S.T. (Future Intelligence Science & Technology), who sends him to Venice with an odd request — investigate the murder of a local woman and find out if her life resembles that of someone else’s in history. Most of the time, this involves talking to the locals and exploring your environment to collect “data points.” Once you’ve collected enough of these data points, you can analyze them and match them up to various historical figures.

“[Malachai] doesn’t understand why they want that or what it’s about,” Jensen said. “But he agrees to do it because he’s curious about what this agency does. It has something to do with history. And they also offer him a lot of money.” 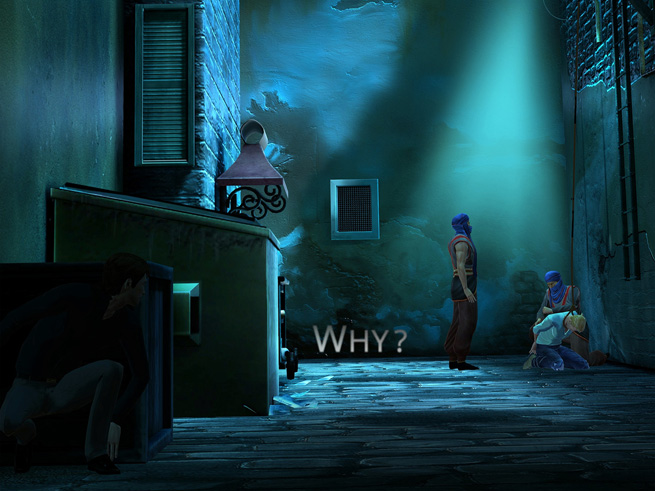 Above: Malachai Rector’s thoughts appear on screen in text.

Moebius sounds a bit like a Dan Brown novel, but during the demo I noticed the influence of another pop culture favorite — Sherlock Holmes. Specifically, the BBC television show “Sherlock” starring Benedict Cumberbatch. Pinkerton Road has adopted a bit of that show’s visual flair, choosing to represent Malachai’s thoughts on the screen in text. Plus, like Cumberbatch’s supersleuth, Malachai is kind of a dick.

“[Malachai’s] a very arrogant character,” Jensen said. “So you can be nasty or you can be nice, and that will have an affect on the information that you learn.”

Moebius is the first adventure game Jensen has fully designed and directed since 1999’s Gabriel Knight 3. Since then, she’s founded casual games company Oberon Media and even briefly worked for social games company Zynga. There, while working on a project, she said she grew frustrated by the lack of emphasis on storytelling during development and knew that it was time for her to do what she really wanted to do.

“I’d sorta been compromising what I really want to do for the last 7-8 years,” she said. “And I just wanted to fucking make an adventure game! You know?”

Jensen added that she thinks it’s a shame the gaming industry has lacked variety for so long.

“It’s not that I think adventure games are going to be the next Halo 3, but why can’t they be the next My Dinner with Andre?” she said. “All the industry has been for so long is action, action, action. I’m happy for us to be a niche thing, but at least we should have a seat at the table. The gaming industry needs to have a lot more types of games for different types of gamers. Not just one note.”

Moebius does not have a release date yet. It will launch on PC, Mac, iPad, and Linux. 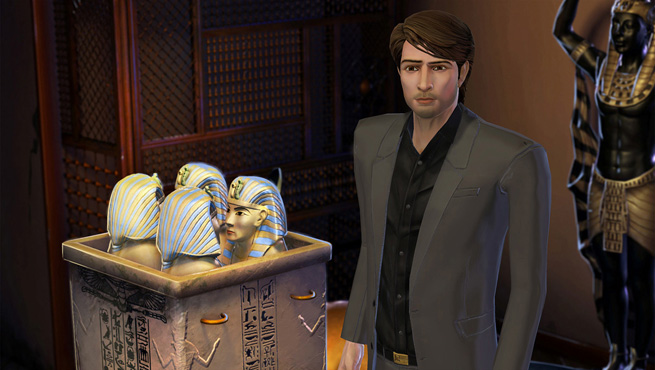 Above: Malachai Rector is a historian with a 175 IQ.