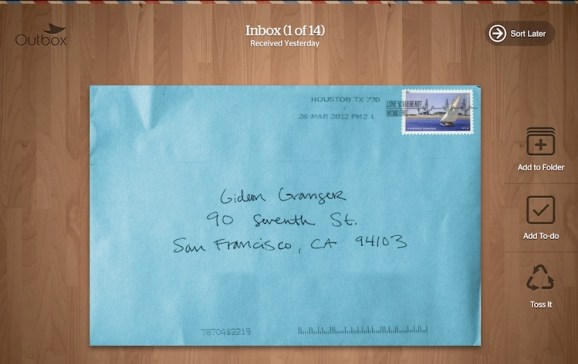 A sample of Outbox's iPad interface

Outbox might be one of the only strangers you actually let open your mail for you. The company got $5 million in its first round of funding today.

The service, which launched in SF in February, will pick up your mail for you, sort through it, and then upload pictures of what you received to an app or your account on its website. From there you can choose to either discard the mail, “unsubscribe” from junk mail, prioritize specific senders, and have letters re-delivered to you. Evidently, they’ll even bring it to you in a Prius.

Because financial and health documents come to you in the mail, the company says it takes security very seriously and only hires those who go through rigorous background checks.

Competitors in the market to change or improve the postal system include PaperKarma, Earth Class Mail, and Zumebox. Of course, there’s also the United States Postal Service, though it doesn’t seem to be trying to reinvent itself anytime soon.

Of course, since its launch, Outbox has had its share of criticisms. Some says the company won’t be able to truly make a dent in USPS, which has so dictated the way we receive mail to this date. Other have said this is just a product for the lazy and that, despite background checks, there’s no one you can trust more to go through your mail than yourself.

Floodgate led the round, and Founders Fund, Correlation Ventures, TDF Ventures, Expansion VC, Peterson Ventures, and WTI all participated. Floodgate is an existing investor from a smaller $2 million round in 2011.

The company explained in an email that it will use the money to open up Outbox to its wait list in the Bay Area before going “fully national” next year. It will also use the money to hire developers, designers, and marketers as it pushes toward that expansion goal. The company currently has a total of six jobs to fill.

Outbox was founded in 2011 and is available in Austin and San Francisco. It costs $5 a month. The company has raised a total of $7.25 million to date.