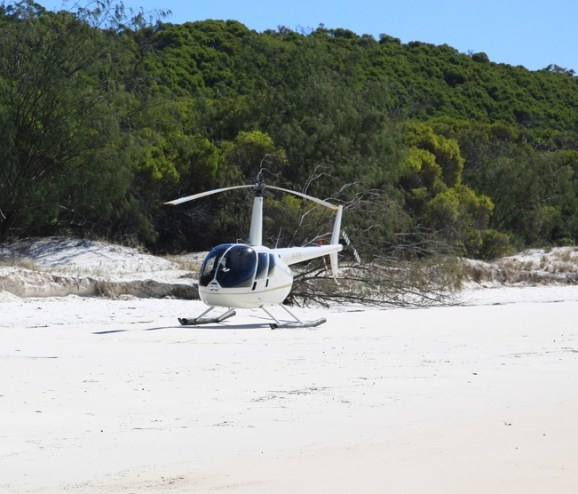 Nothing says summer like a warm breeze in your hair, weekend trips to the beach, and throwing down $3,000 on a private helicopter.

Uber has announced a new summer SUV service to the Hamptons in its most recent effort to separate the nobles from the plebeians. To kick off this highly essential and disruptive service, Uber will celebrate with UberCHOPPER — a limited-time offer on July 3 where, “with the push of a button,” you will be chauffeured to your closest NYC helipad and delivered to your Hamptons destination.

For those who (for whatever reason) are not interested in a private helicopter but still can’t bear to drive themselves to the Hamptons or *gasp* take the Jitney, UberSUV is coming to the rescue. For the reasonable price of $500, Uber will “get you safely and swiftly to dinner at Southampton Social Club, drinks at Montauk’s Surf Lodge, and all points in between.” The best part? You won’t have to interact with the common folk.

The SUVs accommodate up to six people (of your careful and discerning choosing), and the service will be available through Labor Day weekend.

Uber is an on-demand transportation app that seeks to be “everyone’s private driver.” The company started out offering a black car service and has since expanded into taxis, ride-sharing, and lower cost private cars, but luxury is still a cornerstone of its brand. Uber black cars are significantly more expensive than taxis, and during surge periods, the cost for all the services can double. Uber’s main clientele are the young, the urban, and those with comfortable amounts of disposable income.

The startup has fought regulatory battles across the country but continues to grow and add more drivers, services, and markets. It recently entered Taipei, Zurich, South Korea, and Mexico City, and its taxi hailing service was just allowed back onto the streets of New York, after the city’s Taxi and Limousine Commission blocked its taxi service from operating in the city. There are also rumors circulating that Uber is in the process of raising a nine-figure round of venture capital.

The company may be close-lipped about its funding, but it was more than willing to share the details of this “amazing” new service. The commute to the Hamptons often involves hours upon hours of terrible traffic. If you have to be stuck in gridlock, you might as well feel like a baller while doing it.

Everybody who is anybody summers in the Hamptoms after all, and you wouldn’t want them to see you clambering out of a Zipcar (the shame!).

Perhaps I’m being unfair. After all, New Yorkers work very hard for their money, and if they choose to spend it on luxurious transportation instead of, say, anything else, who am I to judge? I live across the country in San Francisco, where a BART strike has crippled public transportation and caused commuter chaos because the two largest unions of SF’s BART system are requesting a pay raise of 8 percent over the next four years. How very selfish and greedy of them.

Taking public transportation is, after all, much better for the environment than driving a car. Or an SUV. Or a private helicopter. But global warming isn’t really a pressing concern. Carbon dioxide may have passed a “long-feared milestone” in May 2013 — surpassing 400 parts per million and underscoring the ever-increasing need for private companies, government, and citizens alike to take action — but beaches are meant to be hot. Who has time to be mindful of the environment when there are other beautiful people to hobnob with and fresh lobster to eat?

It’s not like this is the first time Uber or the tech community has embraced extravagant transportation. Uber cofounder Garrett Camp launched BlackJet in 2012, a service that allows you to book passage on private jets with empty seats. And by “you,” I mean rich people, but Camp told VentureBeat his ultimate goal is to make travel by private jet almost the same price as business class on a standard airline.

These services are fundamentally about creating a better user experience and bringing an aura of class and luxury to travel. Renting a car for a long weekend or taking a regular cab out to the Hamptons will still rack up a bill of a few hundred dollars, so maybe I’ve been too quick to judge. Or maybe I am just pouting that I have to cram into a Honda hatchback with 4 other people to go on my Fourth of July vacation.