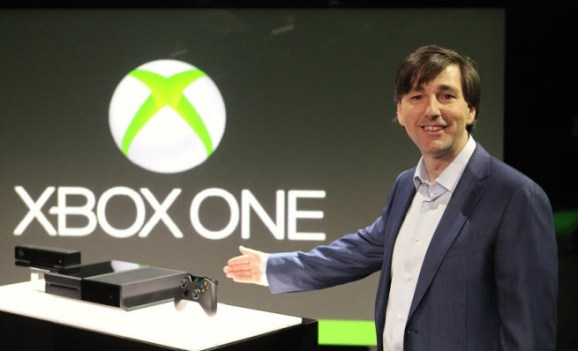 Former Xbox chief Dan Mattrick poses with the Xbox One.

Don Mattrick, the president of Microsoft’s game business, is expected to leave the company and become the CEO of social gaming giant Zynga, according to a report in the AllThingsD.

If that happens, it would be a major change for the game industry, as Mattrick is widely considered to be one of the most experienced and best executives in the video game business.

Mattrick’s expected departure might also set back Microsoft’s plans to launch its Xbox One game console and possibly frustrate Electronic Arts’ search for a new chief executive. Microsoft and Zynga declined to comment to the AllThingsD, and we’ve asked both for a comment. The report cited multiple anonymous sources that the announcement could be made as early as today, after the markets close. Zynga’s stock price is up 9.5 percent to $3.05 a share, which is good for recent trading but is far below the $10 a share initial public offering price. Microsoft’s stock dipped slightly, down 0.2 percent.

Mattrick would likely be one of the only industry executives with enough credibility to convince Pincus to give up the reins at Zynga, the social game company that he founded in 2007. Zynga saw a meteoric rise as gaming took off on Facebook, and it went public in 2011. But as the company grew to more than 3,000 people, it lost its mojo. Competition on Facebook rose, and Zynga failed to execute on the transition to mobile games, where other companies such as King and Supercell have the advantage. The stock has been under pressure for more than a year, particularly since John Schappert, the No. 2 executive at Zynga and a former Electronic Arts veteran, resigned from the company.

Mattrick spent many years as a top executive at EA and ran its worldwide game studios until he made the jump to Microsoft in 2007. There, he helped spearhead the launch of the Kinect motion-sensing system and helped turn around Microsoft’s business in gaming, making it consistently profitable. For the past couple of years, Microsoft has had the most momentum in the console game business and it recently announced the details on the Xbox One, a next-generation game console that will launch in November. In that respect, the timing of the announcement will be tough for Microsoft, if it is correct.

Mattrick had been considered a frontrunner to be the next CEO of EA, whose previous boss, John Riccitiello, resigned earlier this year. Both EA and Zynga are in need of a seasoned hand as the gaming markets evolve and competitive landscape changes. Zynga recently shut down a bunch of games and laid off more than 500 employees. EA is trying to hold costs down, even as it staffs up for next-generation games on the new consoles.

Zynga’s board could hire Mattrick only with the consent of Pincus, who still controls more than half of the company’s voting stock. We’ve heard that Mattrick, a Canadian native, has a new home in the Bay Area and that he has long wanted to return  to the region.

Mattrick’s most recent strategy, as revealed in the unveiling of the Xbox One, got mixed reviews. Gamers reacted negatively to policies relating to consumer rights. Specifically, they hated that Microsoft planned to curtail the sale and use of used games, didn’t have a clear position on privacy related to the new Kinect camera in the system, and would require an online check-in for the box every 24 hours. Sony also undercut Microsoft by pricing the rival PlayStation 4 (also coming this fall) at $399, while Microsoft pegged its initial price at $499.

Microsoft had to backpedal on the consumer rights policies, but it hasn’t changed its price yet. While those foibles were widely criticized, it’s not likely that those matters alone would cause Mattrick to seek a new job, at least in my opinion.