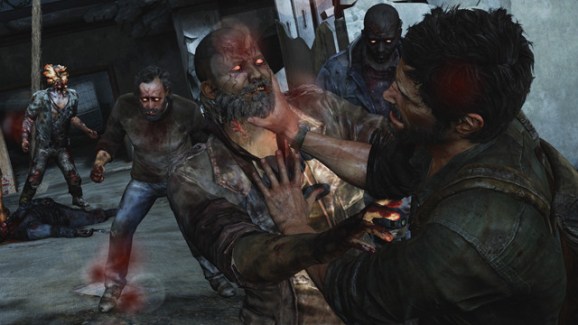 Everyone has zombies on the mind, and it’s not just because of the recently released World War Z film. Sony and Naughty Dog’s The Last of Us crept onto the PlayStation 3 a couple of weeks ago to much fanfare from the enthusiast press and from gamers. But will that great word of mouth translate into retail success for the action-survival game?

And while everyone’s praising The Last of Us’ beautiful settings and gripping storytelling, what does an actual professor of game design think of the experience?

Our own GamesBeat critic, an industry analyst, and an academic break it all down for us in the latest Threeview.

Warning: Some small spoilers ahead!

The Last of Us: The critic’s review

It’s difficult to talk about what makes The Last of Us so good without cruelly spoiling it for anyone who hasn’t played it yet. So much of that involves the sharp writing and evocative performances during pivotal moments in the narrative — even as I grew unsure of its direction, I never once doubted the developer’s storytelling chops. The pacing becomes somewhat sluggish right before you hit the final act, but from there it moves at a 100 miles an hour. I didn’t leave my couch until well after the credits rolled.

The Last of Us: The analyst’s review

Sony’s The Last of Us has been called one of the best games of this console generation by multiple reviewers, receiving a sterling 95 Metacritic score. Developer Naughty Dog has once again produced a high-quality exclusive for Sony, coming on the heels of the highly successful Uncharted series. Unfortunately, as an Xbox 360 owner, I won’t get to play the game, but that won’t deter me from giving an analyst’s assessment.

As a hardware maker, one of the most important competitive weapons in your arsenal is that your hardware-exclusive games cannot be played on other devices. Having a roster of high-quality exclusives is a key selling point. During the PS2 era, Sony benefited greatly by having the initial exclusive on Rockstar’s Grand Theft Auto titles, and the original Xbox probably would have fallen on its face if not for Halo. Gears of War and the aforementioned Uncharted were key exclusive new intellectual properties for this generation; as the next-gen wars heat up, Microsoft has scored a clear coup by landing Respawn’s Titanfall. The high quality of The Last of Us will keep Sony’s current customers happy, could drive a bump in hardware sales, and gives the company another potential hit exclusive franchise for the future.

However, this good news is somewhat counteracted by one puzzling fact: Sony chose to launch this game in the dead of summer a few months before it brings its new console out. A game this good, particularly an exclusive, deserves a better launch window. Gamers’ attentions during the summer are often occupied elsewhere, and the impending launch of new consoles will likely truncate the sales tail of the game. Because the PS4 and Xbox One are now on the horizon, The Last of Us likely won’t help sell nearly as much PS3 hardware as it might otherwise. I expect that the game will probably post around a 600,000 unit number when market research firm NPD Group reports June sales, go on to sell through around one million units in its first year of release in the U.S., and sell about two times that worldwide.

Those numbers aren’t terrible, but had the game received an earlier, better launch window — or been designed for the PS4 — it probably could have done better and driven bigger hardware benefits for Sony.

The Last of Us: The academic’s review

I’m really starting to feel prepared for the zombie apocalypse. Between strategies outlined in the newly released World War Z (keep moving, pay attention to the details, protect your extremities, stick together, duct tape really is useful) and The Last of Us, I cannot help noticing that everyone keeps warning me about it. According to this excellent title by Naughty Dog, it’s going to be beautiful and bleak and really terrorizing, and it won’t be over quickly.

The Last of Us takes place some 20 years after an outbreak, in a postapocalyptic United States filled with factions operating in survivalist mode and bitey “clickers” overcome by a fungal pandemic that has rendered them irrational, rabid, and extremely persistent. A melancholic and poignant score composed by the two-time Academy Award-winning Gustavo Santaolalla, combined with the strong storyline and unrelenting scenarios, make for a great deal of pathos and player investment. Spectacular inside-outside spaces within the ruins of a once-high-capitalist culture are imaged as repurposed by humans and largely reabsorbed by nature. Much of what was once considered so precious is now useless, while the simplest scavenged tools (bricks, bottles, alcohol) can mean the difference between life and death.

The game, as one high-quality example in a plentiful survival-horror genre, taps into the popularity of both zombie and apocalypse narratives like The Road, Book of Eli, 28 Days Later, Zombieland, Planet Terror, and director George Romero’s many films. It’s a little bit The Walking Dead (ethical quandaries in z-town) and a little Children of Men (save humanity by saving a girl).

The ethical-woes issue is a little dubious: In the zombie apocalypse, immediate survival is the goal. One wouldn’t have fret about long-term worries like taxes, an abusive boss, or the brain cancer one might eventually get from a cellphone. I’ve been told that in extreme scenarios, what needs doing often becomes perfectly clear — doing it is another matter entirely.

The greater collective fear of contagion; the fear of being overrun, overwhelmed, colonized; and the fear/desire of the extreme survivalist scenario — these are what interest me the most, particularly in a cultural moment when there is so much global restructuring, competition, and change underway. In time, zombies have gotten faster, and so have the changes.

Jean Baudrillard, the (in)famous French philosopher of contemporary society, wrote that the modern lives we lead have so profoundly disconnected us from what’s real that we can no access it fully. Our existence is so filled with things whose value is manufactured, that we can no longer tell the real from our imagination. The Last of Us provides a stage to play out all the scenarios until we get it just right: when to fight, when to flee, what is real and what isn’t, when to stick together, and when to pick up that really useful duct tape.