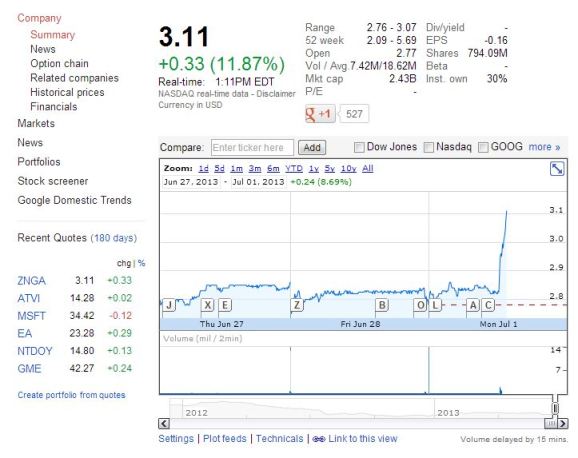 The Zynga stock spikes after rumors about a new CEO.

Wall Street is weighing in on the rumor that Microsoft Xbox chief Don Mattrick might take over the top job at social-gaming company Zynga. Traders seem in favor of the potential change.

The unconfirmed rumor, which originates from an All Things D report, claims that Zynga could reveal Mattrick and his new role as soon as this evening after the markets close at 4 p.m. Eastern.

A top role at Zynga would have Mattrick working with the developer’s long-time chief executive, Mark Pincus. Investors are excited at the possibility that Pincus could relinquish some decision-making since the company has struggled since its 2011 initial public offering.

Mattrick has a reputation for leaving organizations better than he found them. Before Microsoft, he oversaw publisher Electronic Arts’ global studios until 2006. Under his management, EA developed successful properties like The Sims, Harry Potter, and Need for Speed.

The executive moved to Microsoft in 2007. In his time at that company as senior vice president, and then as head of the Xbox division, the company went from a base of 10 million consoles sold for the Xbox 360 to 76 million worldwide. Xbox Live, the device’s online service, likewise grew from six million members to 48 million.

Most recently, Mattrick is best known among gamers as the face of the Xbox One digital-rights management fiasco and policy reversal.

Beginning in May, Mattrick tried and failed to explain the benefits of the Xbox One’s DRM that required a consistent online connection and placed many restrictions on used games. Coming out of the Electronic Entertainment Expo (E3) in early June, Mattrick and Microsoft pulled a 180 that completely changed the company’s policy on used games, DRM, and the online requirement for its next-gen console.