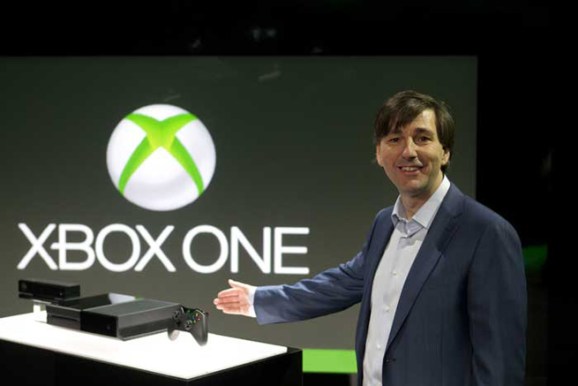 Don Mattrick with the Xbox One.

Microsoft’s Xbox chief is walking out the door to join Zynga just months before Xbox One goes on sale.

Social-game developer Zynga revealed today that Don Mattrick, Microsoft’s Xbox head, is taking over as chief executive officer for Mark Pincus. This leaves Microsoft without a president for its Interactive Entertainment Business (IEB) division, and it might leave some wondering what this all means for Xbox One.

The best answer to that question is probably that the Xbox One is just fine.

“This is a great opportunity for Don, and I wish him success,” Microsoft chief executive Steve Ballmer said in a statement. “Don’s directs [the people who work under him] will report to me and will continue to drive the day-to-day business as a team, particularly focused on shipping Xbox One this holiday.”

That means Ballmer is currently handling the game division. For Mattrick, this exit comes just after he had to oversee a caving in on Microsoft’s policies regarding the digital-rights management for software on Xbox One.

“Thank you, Don, for setting us on a path to completely redefine the entertainment industry,” said Ballmer. “The strong leadership team at IEB and their teams are well positioned to deliver the next-generation entertainment console, as well as transformative entertainment experiences, long into the future.”

Ballmer’s gratitude seems a little misplaced considering the path Xbox One is on now is very different from the one it was on just a few weeks ago.

Fans complained vociferously about the company’s plans to restrict used games and tie physical releases to consoles with a 24-hour online check. After the Electronic Entertainment Expo trade show in Los Angeles, Mattrick made a total reversal that stripped all restrictions from Xbox One — it was a clear rebuke of the path the Xbox leadership laid out for the device.

The unprecedented policy reversal marked a moment in time when gamers had much more say in what a next-gen Xbox will look like than the head of Microsoft’s Xbox division. If nothing else, Mattrick might have felt like he lost some clout that day.

Now, the Xbox One marches toward release without much of the Mattrick baggage attached, and his departure likely won’t have a negative or positive effect on its fate.

Microsoft’s shares barely budged on this news. Investors don’t care that Mattrick is leaving because the damage was already done.

“In the past month, the IEB team showed for the first time here on our Redmond campus, and again at E3, how we are going to continue to transform entertainment with Xbox One,” said Ballmer. “I am incredibly proud of the work and vision culminating in Xbox One.

“I’m particularly excited about how Xbox pushes forward our devices and services transformation by bringing together the best of Microsoft. The consoles are incredible all-in-one devices with built-in services that consumers love, including Bing, Xbox Live, Internet Explorer, SkyDrive, and Skype. And, just as important, Xbox Games, Xbox Video, Xbox Music and SmartGlass light up Windows PCs, tablets, and phones.”

So what does Mattrick’s exit mean for Xbox One? Very little.

Now, who’s going to replace Mattrick? That’s going to say a lot more about the future of Xbox One.