Caesars Interactive Entertainment has toppled Zynga as the No. 1 publisher of social casino games, according to a report by research firm Eilers Research.

That shows that the social casino game market, which is now worth $1.2 billion worldwide, is becoming a lot more competitive thanks to growth in demand, increased startup activity, and a series of high-profile acquisitions.

Caesars is one of the world’s largest legal gambling companies. It acquired Israel’s Playtika in 2011 and picked up popular social games such as Slotomania. Now, that title as well as Slotomania Adventures, Bingo Blitz (acquired with the purchase of Buffalo Studios), and Caesars Casino have pushed Caesar’s to the No. 1 position with 18.6 percent of the overall market in the second quarter, Eilers Research said.

By comparison, Zynga has 15 percent of the market. Zynga previously dominated the market with Zynga Poker. It has expanded to titles Zynga Slingo, Zynga Slots, and Zynga Bingo, and it recently acquired Spooky Cool Labs as part of an expansion in the space.

Eilers said that IGT, the big slot machine company, has moved into the No. 3 position with 14 percent of the market thanks to its $500 million acquisition of Double Down Interactive. WMS is in the No. 4 spot.

Overall, social casino game revenues on Facebook were down 2 percent from the previous quarter to $309 million. Zynga lost market share in the quarter due to double-digit percentage declines in users for Zynga Poker on both Facebook and mobile platforms. Big Fish Games’ Big Fish Casino is the largest standalone social casino app on mobile with an estimated $14.5 million in quarterly revenues, mostly from iOS.

The overall market is expected to grow 67 percent this year to $2 billion by the end of the 2013, Eilers said. 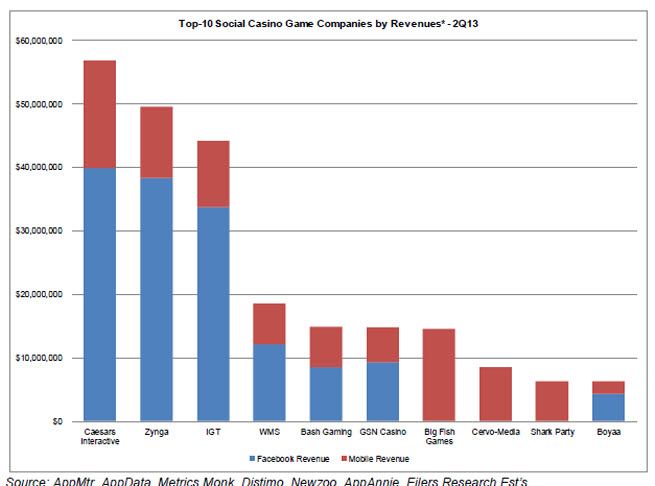 Above: The social casino game market.