LONDON — Just a few years ago, startups seemed like the purview of a niche circle of hipsters, probably living somewhere trendy like Shoreditch or Dalston.

But as I write this at a Starbucks in a leafy and residential suburb of West London, a group of lads sitting behind me are chatting animatedly about their startup’s “value proposition.”

Indeed, two things became apparent during my week in London. The startup vernacular (meaning overused buzzwords like “big data” and “minimum viable product”) is hitting the mainstream business culture, and tech companies are emerging at an unprecedented rate.

Recent estimates suggest that the Internet economy accounts for about 8 percent of the country’s GDP, a higher percentage than the United States. Not too long ago, the British economy was described in the press as “sluggish,” even “moribund,” but the tech sector is cause for optimism and is generating a steady stream of jobs.

From ‘Silicon Roundabout’ to ‘Tech City’

How did England’s capital city establish a thriving tech hub in a matter of years?

Eileen Burbidge, a local tech investor, said she’s been struck by the rapid emergence of startups, investors, mentorship, and support networks in the city.

Jut two or three years ago, she explained, London’s startups were held back by a lack of seed funding, and the scene was in early-stages of development. A decade prior, when she moved from Silicon Valley, the tech scene was embryonic. In 2013, Burbidge can barely keep up with the number of investment opportunities, and her firm, Passion Capital, funded 34 startups across a diverse range of sectors. 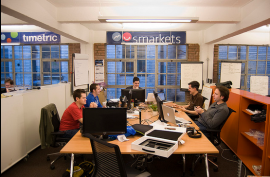 To meet the rising demand for funding, Burbidge has also established a $60 million fund and office space known as White Bear Yard, which she says could invest in up to 50 companies over the next five years in Europe.

According to Burbidge (who insists on publishing extensive data about the firm’s portfolio companies), Passion Capital’s three partners invested in 21 early-stage startups in 2011 and 2012, and only two have “wound down.” The rest have raised follow-on rounds, were acquired, or have continued to grow without needing further financing.

“We have got to the point where we have a healthy, self-sustaining ecosystem” she said.

Eze Vidra, Google London’s campus chief, agrees that the tech sector has come into its own. He points to a combination of factors, including government support and the growth of equity crowdfunding.

The government is a booster of the tech scene, and it keeps track of the local startups. Just last week, Prime Minster David Cameron made a showing at the G8 Innovation conference, touting “open data” initiatives and and announcing a £1 million ($1.5 million) prize for entrepreneurs who could solve the world’s biggest problem.

In December, a few months after the Olympics, Cameron announced a £50 million ($76 million) investment in London’s Tech City, which was spent on coworking spaces, classrooms and workshops for startups in “Silicon Roundabout.” 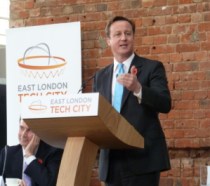 The term “Silicon Roundabout” is often bandied about, but Vidra believes it’s a bit limiting. Entrepreneurs living nearby the Old Street roundabout in East London use the moniker, and that area boasts a large concentration of startups. But clusters of tech companies also operate in South Kensington, a stone’s throw from science- and technology-focused university Imperial College, and suburbs like Essex, which offer a cheaper cost of living.

“With the Olympics a few years back, the government wanted to communicate that the U.K. is the best place for tech startups,” Vidra explained. “So they came up with the [more expansive] term Tech City.”

London entrepreneurs on the hunt for funding are inundated with options.

High-net-worth types, who may have invested in real estate or the stock market just a decade ago, are on the hunt for the next Spotify or Instagram. Likewise, entrepreneurs who made their money in the dotcom boom, are forming venture firms. In the past few years, at least a dozen seed funds have emerged in the city, including #1Seed, Connect Ventures, Passion Capital, and Playfair Capital.

If you’re keen to avoid the traditional venture route, it’s easy to meet angel investors at startup pitch events in the city. Likewise, Crowdcube and a host of others help startups and other businesses raise money online. Consumers can back small businesses for as little as £10 ($15). One U.K. startup, Escape the City, recently raised almost $1 million through Crowdcube.

“If you have a strong team and product, the money will find you,” said Vidra. “It’s become easy to raise money.” As a result, Vidra points out that about 1,000 registered tech startups are operating in London. Just a few years ago, this was just 300.

Another option for entrepreneurs is to seek out the new generation of experienced investors. British tech entrepreneurs who have made money in the U.S., like notorious business software tycoon Mike Lynch, are repatriating and setting up venture funds. The Virgin Group’s Richard Branson and Lastminute.com’s Martha Lane Fox have also begun angel investing in the past five years.

“There is a new generation of entrepreneurs — us — who are going to make money and reinvest,” Kulveer Taggar, a Silicon Valley-based British entrepreneur told me in a recent interview.

All hail the Queen (and tax breaks)

The U.K. government has a grand plan to stimulate startup investment: tax breaks. The Seed Enterprise Investment Scheme, dubbed SEIS, offers a number of incentives for those who fund approved businesses. These include zero capital gains tax on returns from the investment and 50 percent off an income tax bill. Read all about the SEIS here.

The scheme has generated a bit of controversy — one investor argued that it’s made it difficult for good companies to break through the seed round, as most SEIS investors will only put forth a relatively small amount. It’s a similar argument made by those who fear the “Series A crunch.” As we reported, the actual number of Series A deals is going up, but the number of seed deals is rising much faster, making the ratio more off-kilter than in previous years.

All in all, Londoners agree that the scheme has unlocked capital for early-stage endeavors, which will attract the attention of larger Silicon Valley venture firms willing to write larger checks. Burbidge believes that the scheme is encouraging investors to make more risky bets. While the Germany-based Samwar brothers have made their fortunes by cloning successful U.S. companies, the tech sector could benefit from investment in original ideas.

London and the ‘Old Boys Club’

I recently grabbed coffee with Debbie Wosskow, the founder of one of London’s hottest startups,  Love Home Swap. Wosskow admitted that the scene can still feel a bit stuffy. It’s probably better to be male, and the college you attended at Oxford or Cambridge still matters to some venture capitalists. Not that Silicon Valley has it all figured out in this regard.

This may be a potential hurdle for some entrepreneurs, but it’s one that Vidra believes is surmountable.

He suggests that networking is still important, as many of the most active angel investors don’t have a home page or a profile on a site like AngelList. 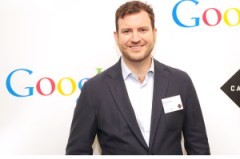 Entrepreneurs can get into the scene with relative ease by attending startup events. Vidra runs Campus London, a coworking space in East London that has hosted speakers like Wikipedia founder Jimmy Wales and original Apple evangelist Guy Kawasaki. Registration is free — and visitors can enjoy high-speed Internet and hobnob with founders and angel investors.

“There are plenty of ways to raise funding without being in an ‘old boys club,'” said Vidra.

How about gray skies and sky-high rent?

Some of the criticisms levied against London as a Silicon Valley alternative: the weather and the notoriously high cost of living. While the year-round drizzle (it’s usually more of a pitter patter than a furious downpour) might not be a turn off to some entrepreneurs, the city is expensive, unavoidably so.

Burbidge suggests living in the outskirts of the city and potentially even splitting rent with early employees or cofounders. Public transportation is fairly reliable and far outstrips the Bay Area, so it’s easy to commute to East London. She even makes a case for the weather, suggesting that it’s no worse than Seattle, the established tech hub that Microsoft calls home.

Indeed, London-based entrepreneurs have made a competitive sport out of being fiscally conservative. They keep rent low by cohabitating or working outside the city. Many opt for a permanent desk at a coworking space like Campus London, which costs about £250 ($380) a month, so they won’t need to shoulder the expense of rent or an office manager.

For Vidra, it’s worth it for entrepreneurs to live in London despite the expense. “The parties, the density of the network, the availability of funding … these are all things to offset the cost of living and the weather,” he remarked. 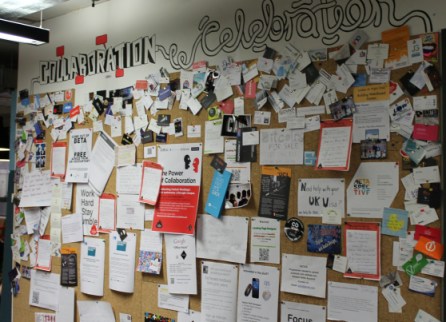 Above: A notice board at Campus London.

‘The energy is palpable — you can’t help but feel it’

Challenges aside, tech entrepreneurs are flourishing in London. Indeed, the city is a global metropolis, which boasts technical universities like Imperial and University College London (well hello there, thousands of employable developers!), tax incentives, and abundant seed funds.

“I think there are untapped resources in the U.K.,” said Richard Price, the British-born CEO of Academia.edu, which often hires from top universities, like Oxford and Cambridge. “There isn’t the same competition for talent.”

Vidra is passionate about introducing visitors to the city to Campus. It’s free to register, and once you’re signed up, you can return at anytime to cowork.

“This is the sum of all parts in one place: office space, events, accelerators,” he explained. “Honestly, you can’t help but feel it from the second you set foot in this building.”

Are you an entrepreneur living in London? What are your thoughts on the tech scene? If you’re based elsewhere, would you consider moving to London? Share your thoughts in the comment box below.