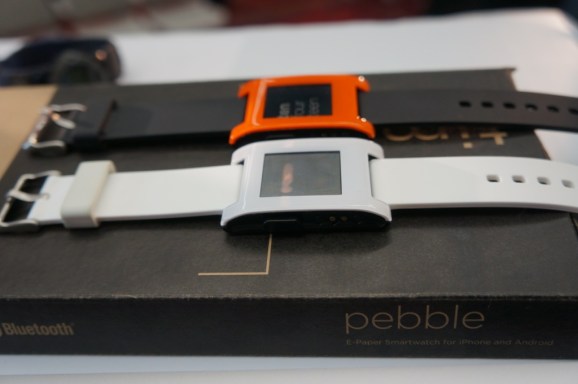 If you aren’t waiting for your Pebble smartwatch to come in the mail, you might be able to buy it at a local Best Buy store as soon as this Sunday.

According to 9to5Mac, which says it spoke with two Best Buy employees, the smartwatch is headed to the electronic retailer’s stores. It is unclear whether it will be available nationwide or only in a few specific locations. An employee also revealed a screenshot of Best Buy’s inventory system, which clearly shows a description of the product as the Pebble smartwatch, the department as “digital communications,” and the subcategory as “appcessories.” It also shows that the smartwatches will be in stock on July 7. However, this could mean that it will arrive in Best Buy’s warehouses that day and be available to the public later.

In May, Pebble received a $15 million first round of funding from Charles River Ventures soon after selling out nearly 85,000 preorders for the device on Kickstarter. At the time, the company said it would use the funding to hire more employees on the software engineering team and expand its developer program as well as meet more product-order needs. The funding might have helped give it the financial freedom to create enough units for Best Buy to sell them in its stores.

The Pebble is significant because it’s an early mover in “wearables” category of devices, which have received a lot of excitement recently, in particular with the rumored coming of Apple’s smartwatch as well as Google’s Glass project. [Editor’s note: We’re debating wearables at our MobileBeat event next week. But tickets soon!]

And it looks like in-store will be your only option to pick up the watch at Best Buy. No home delivery will be available, according to the inventory screenshot.

Today, Apple registered trademarks for its own rumored iWatch in Taiwan and Mexico after doing so earlier this month in Russia. The tech community has speculated that major tech companies such as Google and Apple are looking into making one of these watches as the market for wearables grows.