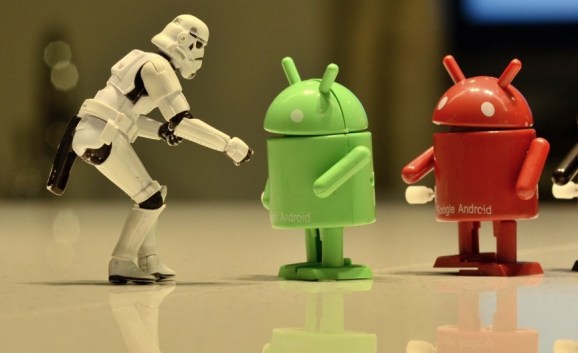 I’m not accustomed to seeing the words “Android continues to shrink” in a report.

A week after iPad browsing share hit a five-month high with 82.4 percent share, according to mobile ad firm Chitika, another mobile  company says that global Android mobile adshare dropped from 41 percent in May 2012 to 36 percent in May 2013.

Velti‘s “state of mobile advertising” report, released just this morning, says that iPhone and iPad significantly increased their ad share in 2013, moving from 20.4 percent to 27.5 percent and 13.4 percent to 17.1 percent, respectively. Apple’s new iPhone 5, introduced in this time span, accounted for 7.9 percent of total ads shown, while Samsung’s Galaxy S III, which launched in May 2012 and shipped 30 million units in its first five months, accounted for only 2.3 percent of all impressions.

Velti says that Apple should prepare for some shrinkage, however, as consumers slow iPhone purchases in hopes of a new model — perhaps Apple’s rumored cheaper iPhone.

Above: Android vs iOS adshare.

It’s easy to read too much into adshare and browseshare numbers that come out on a monthly basis.

They don’t provide great insight into device markets in terms of numbers sold. But Velti says the numbers “provide a highly accurate picture of the market,” at least in terms of how those devices are being used. That’s simply due to the fact that the big networks provide ads for tens of thousands or even hundreds of thousands of apps on hundreds of millions of devices, providing a massive sample size from which full-market data on platforms, people, and usage can be fairly accurately inferred.

And the continuing — and in this case growing — delta between iPhone and Android suggests that there are real differences here in what consumers do and how they use their Android and iOS smartphones. A caveat would be that Velti, though global, is weighted toward those in North America and Western Europe.

In other words, a study with only Asian and India users would likely find quite different results.

One thing that seems clear based on the numbers is that in the U.S., Verizon is grabbing market share from AT&T. Verizon has jumped over 10 percent to a 34 percent share at the expense of AT&T, which is now down to sub-50 percent share. That’s significant, as mobile data is an important and growing revenue stream for carriers — and as it is largely smartphone-driven.

And one other thing of note.

While games are hugely important in app marketplaces, often taking up half the number of apps available on a platform and making up half the downloads, that dominance may be shifting. Game impressions dropped 15 percent year-over-year, Velti said, while entertainment apps and books jumped 7 percent each, and photo apps were up 4 percent.

The number of gaming apps continues to increase, Velti says, but they’re facing increasing competition from media and photography apps for consumer time.