I really want to root for Ouya. It’s an underdog, and the team behind it put a lot of passion into their wee Android-based console. When the ESA came out and bullied them during the Electronic Entertainment Expo, I was totally in their corner. That’s how we operate in America. Little man whups a big man if the little man’s in the right and keeps a’coming.

Unfortunately, I kinda hated the early-supporter unit Ouya sent us, and the retail version doesn’t do a whole lot to change my mind. In some ways, it reinforces my concerns.

In the introduction letter that comes with the retail console, chief executive Julie Uhrman frequently emphasizes how even this Ouya isn’t a finished product. “We will continue to evolve and to add features that improve our product until, well, forever,” she writes. I only wish their product didn’t feel so unfinished as-is.

I was worried before that Ouya doesn’t do much to showcase the talented developers who put their faith in it. Now I’m more put off by lapses that could directly affect consumers.

Above: When GLaDOS met TRON.

It seems iffy from a cyber-security standpoint

Despite what you might have heard, the correct answer is yes…you must enter credit card info before you can do anything on Ouya. And at the present time, Ouya offers no clear-cut way to delete your account.

I wouldn’t call it a set-in-stone requirement so much as a menu loop you get stuck in. You must first create and log in to an Ouya account. The second part of that process kicks you to the “Funding the Fun” screen: 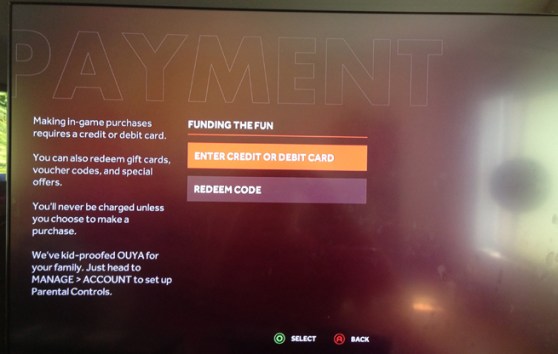 Above: Funding the fun: Also what you do at brothels.

You can’t skip out on funding the fun. Backing up returns you to the registration sign-up screen, which only leads you back to the payment page.

More worrying, once they’ve got your credit card, it’s unclear whether you can take it away from them. A quick look at the account management screen shows you have no options for prying your information out of the cloud: 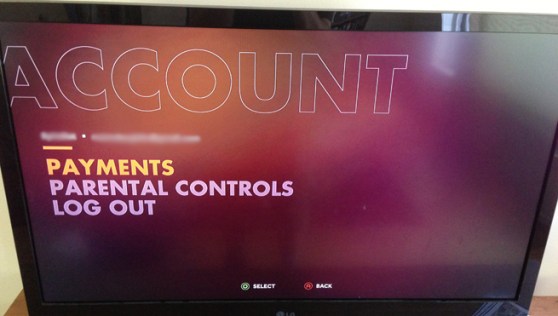 Above: I blurred out my info, but I’m Phuket Ali. Add me!

I eventually went into the Payment menu and replaced my card’s number with gibberish (this didn’t work during the initial setup). That seemed to fool the system. It didn’t log me out, and I could still play games I downloaded…but it did put me back in that payment loop when I logged out and signed back on. Presumably, that means my card isn’t still in Ouya’s database somewhere, but it’d be nice if I could make sure. Ouya Support has yet to respond to my query.

The hardware doesn’t seem to store logins (and definitely doesn’t store passwords), so logging out presumably cuts off access to payment options, emails, etc. if you hand your Ouya off to another user. The person who passed the retail Ouya to me forgot to do that. Unlike other platforms, he had no way to delete his information remotely. The Porche he just bought me looks very nice in my driveway. 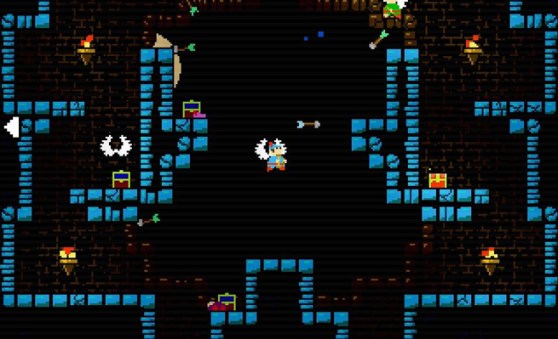 I’ve now spent time with two different Ouya controllers, and together they pretty much sink home the poor build quality.

After I filed my previous review, one of the controller’s shoulder buttons jammed and became unusable. I wasn’t doing anything more strenuous than pressing it, and that’s after 10 days or so of use. When I switched that controller out for the one included with the retail edition — in use for less than a week by that time — I found that one of the face buttons was sticking badly. The one almost universally used for jumping. No lie, Ouya features a lot of jumping games, but I’ve got Super Nintendo Entertainment System controllers from the ’90s that still work fine. No shortage of jumping on that system, either.

Nobody should expect top-quality materials from a $99 console, but if I’m paying $99, I don’t expect it to break like something I bought for 99 cents. 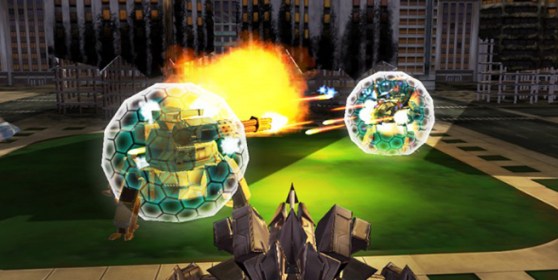 Above: So you couldn’t spring for the bubble shield that covered the entire mech?

To lag or not to lag

And if the controllers are 0-2 for durability, the latency ratio must look like an especially noxious European telephone number. I’d heard Ouya fixed the lag I experienced on the early-backer unit for the retail version. True … and yet, also curiously false.

I made a point of mixing games I tried on the early-backer model with new titles, and while some didn’t have any input gaps, others actually seemed worse than before. Beast Boxing Turbo, a twitch-sensitive example I called out last time, feels much tighter now. Super Crate Box, a hyper-aggressive Super Meat Boy/Super Mario mashup, and Matt Thorsen’s excellent Towerfall work perfectly. The Ball, iMech Online, Ravensword: Shadowlands, and Ouya-exclusive Portal-type puzzler Polarity all kept me wondering when they would do what I told them to. These aren’t the best games ever made to begin with. Add in latency issues, and it becomes regrettably easy to shrug them off and move on.

Some, like Ravensword and Polarity, I can partially throw back on the controller — I picked up a lot of camera drift — or the fault could strictly lie with the games themselves rather than the console. Either way, it suggests very poor quality control. Ouya makes a big point of allowing self-publishing on their system, but that may have led to the biggest issue of all. 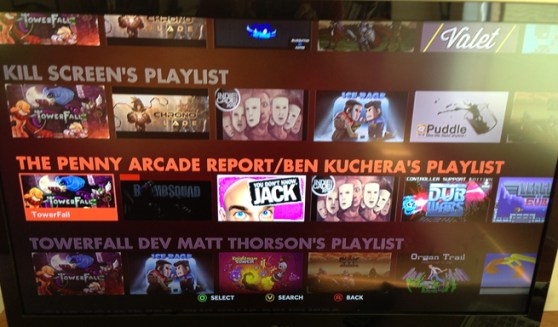 Above: But what would Jesus play?

I found some stellar games on Ouya. We’re talking games that delayed my finishing this piece because they pulled me back in to their sweet, crack-soaked embrace. I’ll evangelize those games and those creators, make no mistake. But the vast majority of the 200+ games available on the Ouya just don’t merit even the super-low $99 buy-in, and many don’t require more than two minutes of your time before you can safely put them away forever.

I don’t mean to bag on these indie creators. They do amazing things with almost zero resources. But only a handful of Ouya’s titles would ever get my money to unlock the full game, and I can’t see myself shelling out for an Ouya just to do that. I’d play them on PC or tablet, hardware I already own, and several of them are available on those other platforms.

Ouya came out of the gate with an impressive number of games, but it’s an unfocused jumble at best, and even the top titles are smaller-scale. The more ambitious examples often suffer just by trying to live up to their bigger console cousins and falling well short. Certainly, no one example qualifies as a killer app. Ouya needs an array of must-play exclusives to justify its price tag, and it needs to promote the hell out of them. Fast.

Because as great and noble of an idea as Ouya is, nobody buys one just to place on their mantle. The games must inspire, or despite Uhrman’s laudable ambitions, Ouya really is finished.