Ninety-seven cents out of every dollar spent on tablets in 2013 will be spent in North America, Western Europe, Japan, and Korea, according to a new report from ABI Research.

Thirty-nine million tablets were shipped in the first quarter of 2013, report author Jeff Orr says — the second most ever — only beaten by 2012’s Christmas shopping quarter, traditionally one of the strongest quarters. That quarter saw 52.5 million tablets shipped. The lion’s share of those tablets were sold in developed, wealthier nations.

And that trend looks to continue. 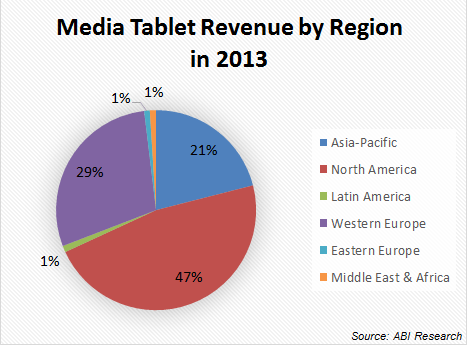 “North America is forecasted to claim nearly half of the estimated $72 billion expected to be spent this year on tablet devices,” Orr wrote in a statement. “Western Europe and Asia-Pacific will also have their hands in the honey pot for a combined 50 percent of world tablet revenues.”

That’s an interesting prediction, more for who it doesn’t include than who it does include.

China, which surpassed the U.S. as the world’s leading smartphone market sometime last year, still isn’t a major player — or even a minor player — in tablet sales. That might be due to the fact that Asian buyers have typically adopted the fablet trend more than Western consumers, perhaps preferring one mid-sized device over a standard-sized phone plus a larger tablet.

Given the focus of the tablet market on wealthier nations, one big question is whether Apple can maintain its tablet lead. Analysts have predicted that this is the quarter in which Android tablets will hit 60 percent market share. The race is particularly important in an era of declining laptop and desktop sales, as early 2013 will almost certainly see tablet sales outpace PC sales.

The other question is when Russia, China, India, and Brazil will join the crowd of countries currently driving the tablet trend.