Well, it had to happen sometime.

A few rowdy July 4th celebrations on a New Jersey boardwalk turned into real-life Jersey Shore as one of Google’s Glass Explorers happened to be testing the extended video recording option on his Google Glass device.

“I picked up my Google Glass explorer edition last week,” Chris Barrett told me. “I wanted to test Glass out, so I filmed some fireworks, getting a very cool first-person perspective. About 10 minutes after the fireworks, we were walking back to our car, and I just decided to try it out on the boardwalk.”

The result is that Barrett, founder of PRServe and a documentary filmmaker, caught the aftermath of a fight and arrest, on camera, through Google Glass — almost certainly the first arrest filmed on Glass:

The video itself is pretty ho-hum — you hear the word “fight” somewhere around the 30 second mark, after Barrett walks through a store and onto the boardwalk itself. Apropos of nothing save the date, a chant of “USA, USA” breaks out, and then you see a short scuffle, followed by a shirtless young man being handcuffed, arrested, and led away.

“I walked right up, saw a crowd forming, and people were saying a fight was going on,” Barrett told me. “With Glass I went closer to the action than I probably should have and saw a couple fights going on. I think I got the first arrest with Google Glass … kinda cool!”

That’s nothing we haven’t seen before caught on “tape” by a videocamera or a mobile phone camera, but the fact that Google Glass is a wearable device that, especially at night and in a crowd, might just look like a pair of fashion eyeglasses means that video capture — surveillance, if you will — is easier than ever.

Which is exactly what has legislators from West Virginia, bars in Seattle, and casinos in Las Vegas worried. 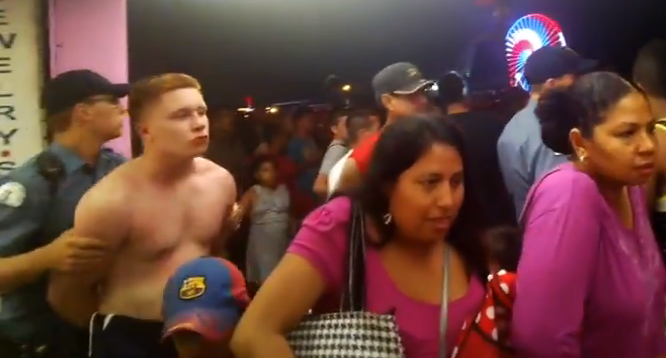 Above: “I think if I had a bigger camera there, the kid would probably have punched me.”

Realistically, of course, there are much better and easier ways of inconspicuously recording video: pinhole cameras, gear bought at “spy stores,” or tiny wearable cameras that take pictures every 30 seconds. But that Google Glass is made by Google — a massive and powerful corporation — and that it is designed as tech that you could conceivably wear every waking hour and activate with a wink seems to be what makes it more controversial.

In addition, of course, there’s every likelihood that this will become a mass-market consumer device, with millions or even tens of millions of users walking around every day with Glass. But for now, most people don’t know what it is, according to Barrett.

“Only two people stopped me on the boardwalk, asking about Google Glass. I don’t think the general population knows what it is yet.”

That’s a good thing, especially for people who are capturing video of tense and violent situations. In part of the video, Barrett comes face-to-face with, presumably, one of the combatants, who looks like he’s still spoiling for trouble.

“I think if I had a bigger camera there, the kid would probably have punched me,” Barrett told me. “But I was able to capture the action with Glass and I didn’t have to hold up a cell phone and press record.”

Barrett thinks it’s a revolution in citizen journalism and perhaps even documentary film-making. It’s certainly continuing the change that cheap portable video recording equipment has been ushering in ever since Rodney King — and probably stepping it up a notch, too.

“This is a huge step in citizen journalism,” Barrett said. “If Google Glass takes off, everyone’s going to have their entire life captured … first words, first steps … but also people getting shot, and natural disasters.”

Whether that’s exactly a good thing, I’m not certain, but it certainly has potential for being good. It also has potential to lead people into dangerous situations in hope of getting great footage. Barrett told me he went closer than he would have, due to his desire to test out Glass, and maybe close than he should have.

“I’ve always been about capturing stories and being a story-teller, so having a device that will change the way people capture stories is unbelievable.”