Starr Long has teamed up with Ultima creator Richard Garriott again to make what they term as the next big fantasy role-playing game, Shroud of the Avatar.

Long will help Garriott create the new game for Garriott’s latest startup, Portalarium, which raised more than $2 million for the game via a Kickstarter crowdfunding campaign. The announcement of Long as executive producer will give the game even more star firepower than the highly anticipated game already had. 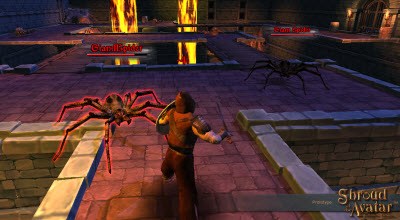 Above: Shroud of the Avatar

Long and Garriott teamed up on the sci-fi online game Tabula Rasa, which turned out to be a dud. But they fared better on their last big fantasy role-playing game, Ultima Online, which became the first commercially successful massively multiplayer online role-playing game.

The Austin, Texas-based company made the announcement during the RTX 2013 event at the Austin Convention Center, where Garriott will show a game demo on Saturday. Long is a 20-year veteran of gaming. He started at Garriott’s Origin Systems studio in Austin. He also helped Richard and Robert Garriott found Destination Games, the maker of Tabula Rasa that was also acquired by NCsoft.

For the past four years, Long served as an executive producer at Disney, where he oversaw the studio that made Pirates of the Caribbean Online, Pixie Hollow, and Toontown. He was the executive producer of Disney Parent App on Facebook, eight learning minigames in Club Penguin (including Pufflescape, the second most popular minigame in the virtual world), Club Penguin Mobile, five Disney Connected Learning games on iOS, and Disney Connected Learning platform.

“I am thrilled to be moving back to Austin to partner with Richard on his next fantasy role playing game,” said Starr in a statement. “Richard’s ideas for remaking the genre are well aligned with where the industry is today in terms of technology and design. It is really exciting to know that we are creating Shroud of the Avatar with the idea of bringing back the concepts and principles that Richard used successfully in making his Ultima series. With all of that said, what I most look forward to is working directly with the community to make the product they want, which is the real power of crowd funding.”

Shroud of the Avatar is expected to launch in the fourth quarter of 2014.

Garriott said in a statement, “If people enjoyed the leadership that was in place when we were creating Ultima Online, they’ll be very happy with the team we’ve put in place for Shroud of the Avatar. Starr Long is a longtime colleague of mine, and he is absolutely one of the visionaries in this space and his track record shows it. I know he’s ready to roll up his sleeves and jump right in to help us make the next epic RPG. This news sends a clear signal to our fans that the game they’ve been waiting 15 years to play is that much closer to reality.”