Last month at international ad festival Cannes Lions, one of the most closely watched areas was the mobile category, where this year there were over 1,000 entries. As the judges noted, winning ad campaigns combined creativity, idea, execution, and relevance in a way that could only be achieved through the mobile platform. The emphasis was on portability, connectivity and pervasiveness – in other words, campaigns that were mobile at their very core.

Why is this important? Because for the first time, a coveted win at this exclusive festival was less about the creative – the emotional effect of the “art” on the consumer – and more about the technology. A win in the mobile category meant the agency had to ditch the idea of creative concept first and start thinking platform first. In a way, it’s the last shovelful of dirt being thrown onto the grave of the Mad Men era.

Cannes is by no means a measure of which campaigns are the most effective. Unlike many digital awards, there is little to no emphasis on metrics or results. But most of the winning mobile campaigns were highly effective. Why? Because they integrated mobile technology into the user experience.

What is mobile technology?

We just named about a dozen unique, interactive elements that have never before been available to marketers in one package. Print, television, desktop, even out-of-home digital display and POS advertising pale in comparison to what mobile offers. It is by far the most exciting and most powerful medium for anyone looking to capture the attention of a consumer audience.

The trick, however, is finding the right combination of technology for each campaign, and then coming up with the artful and engaging creative to match.

VentureBeat will be exploring this topic further in our MobileBeat conference “Brands and agencies” track, next week in San Francisco. Buy your tickets now!

When thinking platform-first instead of concept-first, creative teams have to be able to imagine the utility of the campaign to the user, not the impression. They have to put function before form, which can be a challenge to the average agency creative.

For instance, an iPad user flipping through The Wall Street Journal might come across a full-page interstitial. On a desktop, this would be an annoyance that they’d have to click away from by carefully positioning their mouse cursor on the “x” in the top right corner. On the iPad, it’s gone in the flick of a finger. But a great mobile designer will incorporate other gestures into the rich media ad itself, such as a 360-zoom feature of a product or swipe down to reveal a special offer.

Another example is in mobile video. Unlike desktop, when you play a video on a smartphone or tablet, it is a full-screen, immersive experience – a single task. But mobile device users are, by nature, kings of multitasking. They are far more likely to tap on interactive elements (i.e., calls to action) that you lay on top of the video. This results in deeper brand engagement as well as better metrics to measure campaign effectiveness. 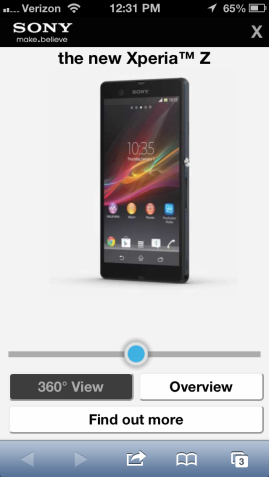 There’s been some talk about the effectiveness of advertising – or lack thereof – in mobile. Publishers are still struggling with how to sell it, and instead of investing in mobile formats, they’ll often come up with cross-device alternatives, none of which perform nearly as well. You simply can’t take a banner that was designed for desktop, shrink it by 60%, and call it a day.

And the numbers back this up. We analyzed 378 US campaigns on our platform, each with over a million impressions. Rich media ads outperformed regular banner ads by as much as 400%, with an average 1.3% clickthrough rate vs. 0.36%. In some cases, such as the ad for the Sony Xperia Z, campaigns achieve CTRs as high as 6%.

Because users see integrated ads as less intrusive, they are more likely to interact with them; “dwell time” on each ad is an average of 3x longer. They are also more likely to convert; we’ve seen conversion rates hover around 3% on these types of rich media ads.

But here’s the dirty little secret in mobile: These kinds of results are not driven solely by the integration of creative with the device or front-end technology. The back-end technology – the beneath-the-surface details – are just as important, if not more.

The problem with mobile, and the reason so many publishers and advertisers get frustrated, is that there are so many pieces that have to fit together. There’s the rich media creative process, but there’s also mobile ad serving, mediation, targeting, tracking, analytics, and campaign optimization.

Mahi is responsible for commercial activities for Opera Mediaworks’ consumer mobile products and services. Before joining Opera, he was co-founder and CEO of AdMarvel, acquired by Opera in 2010. Prior to AdMarvel, Mahi co-founded Frengo, a mobile social media platform. He also spent 10 years at VeriSign, where he was part of the startup management team and served in various technology leadership roles at Taligent, Apple, and NCR.