Education startups don’t typically have money to burn. But Desire2Learn is an exception; it recently raised $80 million, the largest-ever venture investment in a Canadian software company.

What’s the company doing with all that cash? “We’re breaking down barriers in education,” asserts founder and chief executive John Baker in a phone interview from the offices in Waterloo, Ontario.

Specifically, Desire2Learn is hiring visually impaired and blind workers to test new products before they hit the market. The company is positioning itself as a pioneer in the accessibility sector, and it hopes to outstrip the efforts of Microsoft and Apple.

Baker believes that blind and deaf students and those with learning disabilities have been overlooked by most tech companies or treated as an after thought. But he is confident that assistive technology products can “level the playing field” in the average classroom.

Desire2Learn already has sufficient reach to make an impact. Its personalized learning tools are currently see use from 8 million students in the U.S. and Canada, which is blazing-fast growth for a company that launched in 2009.

Over the past several years, Baker has been quietly setting up a design and engineering team that is fully focused on accessibility. Four employees are currently working on the research and development effort on a full-time basis. 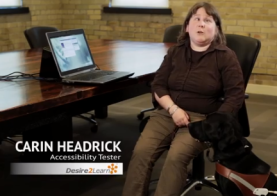 Above: Carin Headrick tests products to ensure they are accessible.

In addition, several Desire2Learn employees are blind, and it will test-drive products before they are put in the hands of visually impaired schoolchildren.

“They will go through every single early release and identify what needs to be improved,” Baker explained.

Headrick is blind and an self-described “avid web user.” Each morning she brings her guide dog, Tansy, to work.

“Online courses are great [as] you can feel like the instructor is right there, but if the interface or content is accessible, it becomes a struggle just to use it, rather than learn the material,” Headrick explained in an instructional video.

Headrick uses a JAWS for Windows screen reader, which is an expensive but popular option. She also runs Desire2Learn’s technology in the background, which helps visually impaired students more easily scan their grades, skip links, and submit assignments.

The focus on accessibility stems from a philosophy that Baker inherited from innovative thinkers like Steve Jobs. If you design for “edge cases” or “extreme use cases” he explains, you can do a better job at building a learning environment that supports every student.

Breaking down barriers to learning

These efforts have not gone unnoticed by the community. Today, the company was recognized by the National Federation of the Blind for its efforts. Desire2Learn was awarded the Dr. Jacob Bolotin Award, which is bestowed on companies and individuals that are helping the blind integrate into society on a basis of equality.

Desire2Learn is not the first technology company to win the honor. Google’s Ray Kurzweil also received this award for inventing the first print-to-speech reading machine for the blind. Apple and Desire2Learn competitor Blackboard Inc. have also been recognized by the National Federation of the Blind.

Baker is also hoping to cooperate with other entrepreneurs working in this space. So Desire2Learn also announced the formation of its own award program, which will recognize individuals building accessibility tools for the classroom. The company is investing $40,000 into the award.

“We want to work with thought leaders and experts in the industry,” said Baker.

For some context about the new tools for the blind, I spoke with my aunt, Wendy Poth, a clinical social worker who lost her vision when she was 7. Poth is optimistic but fears that too much tech (zoom functions, speech and so on), will hinder visually impaired kids in the long run, as they won’t learn braille. “This accessibility software is great — but braille teachers need to be looped in and immersed in the process,” she said.

Poth also stresses that technology for the blind and deaf is still very limited. Giants like Microsoft and Apple have taken an interest — and Google is making some serious strides in this department — but there is plenty of work to do.

Baker says the goal isn’t to make an immediate profit, and he’s open to partnership opportunities. But he also admits that the accessibility focus will give Desire2Learn a competitive edge over other cloud-based learning tools on the market.

“My hope is that schools will choose us over a technology that introduces any barriers to student learning,” he explained.

For more on Desire2Learn’s accessibility work, check out the video below.
[youtube=http://www.youtube.com/watch?v=-8haBSM59wE&w=560&h=315]