In further proof the U.S. market is unlike any other in the smartphone industry, Apple’s iPhone grew market share in the last three months while Android held steady.

For that, Apple can thank T-Mobile.

“The highly anticipated release of the iPhone on T-Mobile has benefited iOS in the latest three month period, though it has not yet impacted T-Mobile’s share in the market,” said Dominic Sunnebo, director of market research firm Kantar, in a statement.

Android continues to lead the smartphone market share battle in the U.S. with 52 percent of the domestic market, according to Kantar Worldpanel data, while Apple slightly closed the gap, surging to 41.9 percent share in the quarter ending in May.

That’s up year-over-year from 38.4 percent in 2012, but down slightly sequentially, as Apple had taken 43.5 percent market share in the previous quarter.

But the most interesting numbers are elsewhere.

BlackBerry almost disappeared with .7 percent share, down from 4.6 percent in 2012, while Windows Phone grew about 25 percent to a — surprise, surprise — 4.6 percent market share. But the coincidence of that one number describing two different platforms, two different companies, in two different years, is no accident.

For years now, BlackBerry has been the sick man of the smartphone industry, hemorrhaging market share as it diddled and fiddled, finally tossing its leadership team, and slowly bringing out new models.

Join VentureBeat to explore the future of app development across these different mobile platforms at our MobileBeat conference starting tomorrow. Buy your tickets now! 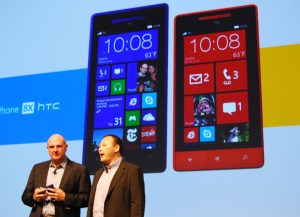 We tend to forget that only three short years ago BlackBerry had more market share than Android and iPhone, and Symbian — Symbian! — was even bigger. Now, after catastrophic drops in 2013 and a 2012 to forget, BlackBerry is sub-one-percent.

Death knells don’t ring any louder than this.

The last Kantar numbers showed massive growth of Windows Phone (on an admittedly small base): a 52 percent increase year-over-year from 2012 to 2013. This quarter’s numbers aren’t quite so dramatic — the increase is more on the order of 24 percent from the year-ago quarter’s 3.7 percent market share — but the vector is still the same.

It remains to be seen if Microsoft can continue and perhaps accelerate this growth to numbers that might start to challenge iOS and Android more significantly. But it appears clear that with the backing of a major, healthy, global enterprise, a unified platform and devices plan, and more new devices, Windows Phone is taking the role of a solid third player.

The next step for Microsoft is to bump that five percent to 15 or 20 and make it obvious to all.