If you haven’t played a combat flight simulator in a long time, it’s time to climb back into the cockpit. Wargaming.net just launched the open beta test for its World of Warplanes online game, and the upcoming release makes the complicated task of flying and shooting much easier than past offerings.

In fact, Wargaming has made it so easy to fly with a computer mouse that I don’t feel the need to pull out my dusty joystick to play World of Warplanes, which takes place in a massively multiplayer online world. And that should enable Wargaming, the maker of the wildly popular World of Tanks, to broaden the market for the air-combat genre.

I have played combat flight sims on and off for decades, but few releases have come out in recent years. They’re expensive games to make, and the hardcore players are particularly hard to please. They want ultra-realistic experiences, but Wargaming didn’t build World of Warplanes for them. It’s hard to master but easy to learn. 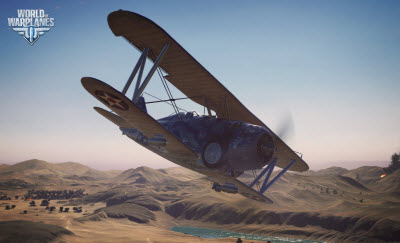 Above: World of Warplanes has planes from the First World War.

The bane of earlier flight sims was their complexity. Companies typically bundled them with joysticks that had lots of buttons, so you could use them to fire off missiles and adjust speed. Games such as Spectrum Holobyte’s Falcon 4.0 came with thick manuals. Not only did you have to use your joystick, you also had to remember a bunch of shortcut commands on a keyboard.

Most people rebelled against the crazy arms race toward more realistic and complex games, and the flight category almost died out. With releases like Fighter Ace and a free-to-play version of the non-combat game Microsoft Flight, Microsoft tried to dumb down the genre and keep it alive. But those experiments ended badly, leading to a shutdown of the company’s flight-sim division. Despite a few hits here and there, combat flight simulators remain a dying breed.

But Wargaming’s Victor Kislyi, the chief executive of the 1,400-person developer, is just crazy enough to try another revival. Wargaming brought back World War II with its addictive free-to-play MMO, World of Tanks, which has more than 60 million registered players.

Wargaming has put years of effort into World of Warplanes, and it had more than 2.7 million applications from 194 countries for its closed-beta test. On Tuesday, Wargaming finally became satisfied with the tough task of flying with a mouse, and it launched the open beta for its new title.

In Warplanes, you can fly aircraft from the 1930s to the 1950s. You start out with four biplanes. If you play enough, you can earn virtual currency to purchase better aircraft. But you can also purchase new planes with real money. So far, the game has planes from the U.S., Germany, Japan, and the Soviet Union. 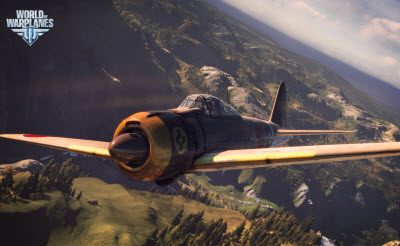 Above: Another playable aircraft from World of Warplanes.

The tutorial is easy. It teaches you how to fly with a mouse in just a few minutes. Then it sets you loose.

Innovation comes from making the vertigo-inducing chore of flying a game much easier with a mouse. I found it incredibly intuitive to fly, mainly by paying attention to a few simple indicators on the very clean user interface.

Your altitude is on the right of your cockpit indicators, and your airspeed is on the left. You steer by pointing your mouse in a particular direction. You know your flight path because of the big crosshairs on the screen. When you are chasing another plane, you simply put your crosshairs on top of the plane, and you will follow it, even during a big turn. During the chase, you can still see the enemy as you maneuver your plane behind the target. A red arrow tells you which way to turn when the enemy is outside of your field of view.

When you are tailing a hostile and you are close enough to shoot, a red circle appears just ahead of your target. That’s where you shoot. When that red circle appears, your second crosshairs, colored orange, appears on the screen. When you maneuver your plane properly, the crosshairs will appear on the red circle, and then, it’s time for you to fire. When you want to shoot, you just press the left mouse button. If you need power, you hit the “W” key.

And that’s it. You can hit start, and the matchmaking system will put you into an air melee with others who have similar rankings. It takes a minute or so to populate a skirmish, and a countdown begins. It’s an easy way to get you into the action quickly.

You play in 15-versus-15 matches against other real players. You start out flying in formation about 1,800 feet above the earth. You don’t have to deal with the tough chores of taking off or landing. And you don’t have to sit through a boring journey to get to the air battle. You just jump right in.

To test things out, I tried out my old joystick. But I had trouble calibrating it and found that I actually preferred flying with the mouse. It was easier, particularly because it’s tricky to hold the joystick steady if it’s not bolted down to your desk.

I also had my 10-year-old and my 13-year-old try out the game. Neither of them had virtually flown in years (not since trying out Microsoft Flight for a little bit). I showed them how to fly, and they were piloting competently within a few minutes. The 10-year-old was shooting down planes in no time, and the 13-year-old took a little longer to adjust. They made amateur mistakes like chasing another plane into the ground or getting vertigo from losing sight of the horizon. They stalled their planes, too. But it took little time for them to fly competitively against other real players.

If you want to win, teamwork is important. You can go after the enemy’s headquarters on the ground. If you take it out, you can cause disarray and confusion among the other side’s antiaircraft batteries. And if you fly in formation in an unexpected direction, you can take the opposition apart piecemeal.

A slideshow that appears before the start of every encounter gives you basic tutorials. You want to fly high to pounce on enemies below you with an airspeed advantage. If someone is on your tail, you have to zigzag to escape. If an enemy is on your ally, you can pull in behind to take out the distracted pilot. All of these tips are well-known to veteran pilots, but they’re helpful for the masses.

World of Warplanes is a fairly hefty download, but you can activate it and come back about a half hour later. I started out cold and was on the winning side about half the time. In every match, I scored one or two kills. Quite often, I would damage a plane that someone else had downed. And I also collided with a lot of players early on.

So far, I am enjoying the game immensely, and I don’t miss my joystick at all.

World War II titles have fallen out of favor to my dismay. I’m very pleased with where Wargaming is going, and it might single-handedly bring back World War II games. The company’s next project is World of Warships. Tanks. Planes. Ships. Now that’s all you need for a gigantic gaming empire.