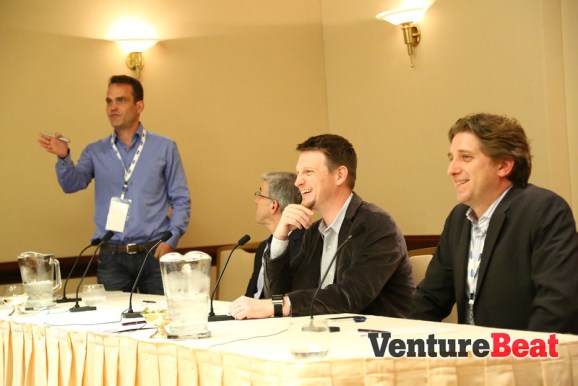 SAN FRANCISCO — The ubiquitous sensors on our mobile gadgets are both a blessing and a curse. They enable all sorts of new functionality that we could only dream of before the smartphone era, but at the same time they also lead to tons of data that consumers will have to deal with. And with wearable computing on the horizon, things will only get worse.

At our MobileBeat conference in San Francisco today, we brought together several executives to suss out this problem in a panel led by Mikael Berner, chief executive of EasilyDo. Will tech companies have to step up to help consumers make sense of all this new data? Or are we getting worried over nothing?

Tony Salvador, Intel’s Director of Experience Insights Research, is optimistic. He says the upcoming wave of sensor-driven data is an “opportunity for software and algorithms … for design to seamlessly integrate data.” He added, “we’re just going to be as overwhelmed as we want to be.”

“We certainly could be overwhelmed, the onus is on us to design the user experience so we don’t get overwhelmed,” said Jef Holove, chief executive of Basis, maker of a sensor-packed health tracking watch. “Any amount of data is going to be overwhelming for some of us.”

Ultimately, the panelists saw more potential for improving consumers lives with more data, rather than just becoming another headache. Particularly hopeful was Dave Mathews, chief executive of NewAer, who built an entire business around the inherent potential of sensor data. For example, NewAer’s platform can automatically drop a pin on a map when you park your car.

Salvador expects that we’ll get even more ways to control our data over time, especially since it will become a valuable commodity for consumers. “Those are digital assets consumers actually have, and circulating those assets creates value,” he noted. For example, Progressive Insurance already lets you donate your user data for a discount on your bill. It’s not hard to imagine other companies coming up with ways to tempt users away from their data (and it’s even easier to imagine how easily users will give it up).

As with any technology, sensor data has the potential for both good and evil. Take the simple data point of knowing if you’re home or not: Mathews pointed out that the Nest smart thermostat’s ability to know your location has made his life easier (you can program it to reduce air conditioning usage when you’re not home, for example). But that same data also led to PleaseRobMe, a site that used to list publicly shared FourSquare data to point out when consumers weren’t home.

I brought up a point made earlier in the day by Qualcomm’s chief marketing officer, Anand Chandrasekher, who mentioned that we’ll likely need more standards to help developers more easily take advantage of sensor data.

“We have standards [like BlueTooth] and it’s still a very fragmented space with wide diversity … as a developer diversity is very very complicated,” said Holove. “Yes I’d agree that more standardization would make development a lot easier … but we have to be careful about standards working against innovation.”