The multiplatform NCAA Football 14, coming out tomorrow, follows the series’ solid-yet-standard formula. It has the modes you’re used to — exhibition, season, the team-building Dynasty mode, the create-a-blue-chipper Road to Glory, etc. It has the pseudo-ESPN presentation. And it has enough playbooks to make a freshman quarterback wish he was still back in high school.

But I don’t want to focus on what you already know. Let’s discuss what you probably don’t know about NCAA 14.

Grind, earn XP, and level up … playing football
As I defeated another monstrous horde and added promising followers to my ever growing party, I proceeded beyond the threshold, bringing me closer to the hallowed crystal egg.

In other words, NCAA 14 has role-playing elements.

This year, developer EA Tiburon introduced compelling RPG-inspired elements into Dynasty mode. Your virtual coach can now level up depending on your team’s performance. Wins, yardage records, recruiting milestones, and other accomplishments translate to experience points. As you hit new levels, you earn points to apply toward respective skill trees — one for the head coach, one for recruiting, one for the defensive coordinator, and one for the offensive coordinator. 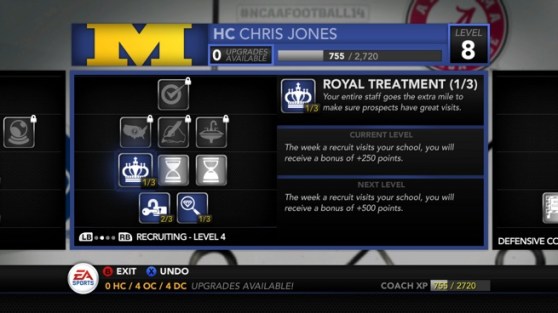 Above: NCAA Football 14 adds RPG-style elements to its Dynasty mode.

You can turn your program into a contender with skills like Road Warrior (quarterbacks play well away from home), Coachstradamus (higher chance to predict opponents’ plays), or Royal Treatment (give recruits better on-campus visits).

Physics that you’ll actually want to study
Tiburon included the ballyhooed Infinity Engine physics system in NCAA 14 that it introduced with last year’s Madden NFL release. And it’s a significant improvement from the predictable collisions of yesteryear. On-field players move with more realism, and hits land with more impact. Running backs feel weightier, and they change direction with increased momentum. 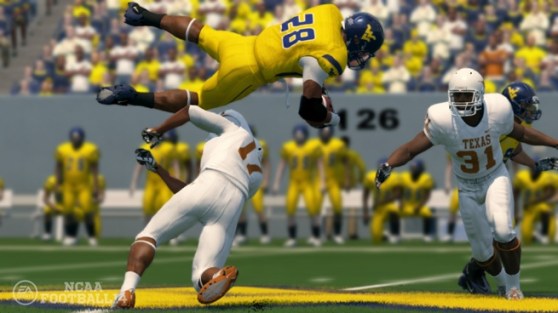 The dynamic physics have also enhanced the way NCAA 14 handles blocking. Linemen smash into each other more like their real-life counterparts. You now have to think differently when hitting holes to ensure big gains, but when you break those runs, they feel extra satisfying.

Go to a Nike skills camp just like a five-star stud
NCAA isn’t Tecmo Bowl. You can’t just pick a play and run for daylight like in the 8-bit classic. A lot of preparation goes into each down. For instance, the A button can select a formation-changing audible, call for a snap, and throw the ball to a specified receiver — all in the same sequence. Certain maneuvers require fighting-game like dexterity.

So how does a series newcomer or rusty veteran get in virtual shape? Using the Nike Skills Trainer.

The Trainer helps players sharpen abilities through simple minigames. You can learn how to master a running back’s spins, jukes, and stiff-arms through the Oklahoma offensive drill. And if you want to get better at tackling, you can flip the scenario with the Oklahoma defensive exercise.

You can’t rely on the minigames to teach you much about the actual sport of football, but they serve as adequate — and oftentimes fun — tutorials for some of NCAA 14’s mechanics.

Ultimate Team is not a superstar feature
NCAA 14 doesn’t have a showy, never-before-seen feature like many of its predecessors. Instead we get Ultimate Team, which lets you put a lineup together using trading-card style booster packs. You begin with a starter deck that includes components to build a team, such as players and a stadium. Successfully completing challenges nets you coins that you can use to buy more packs. The experience is a retread from other-type-of-football sibling FIFA, so it doesn’t have that fresh new-mode smell like last year’s Heisman Challenge. 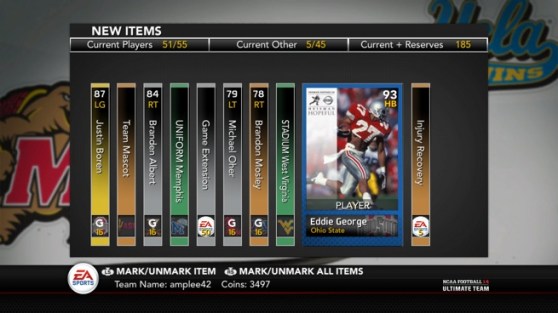 Above: Earn booster packs to strengthen your Ultimate Team.

Ultimate Team is fun, and I’m sure many people will enjoy piecing together effective squads for solo and online scrimmages. But the addition just isn’t that sexy, and it’s another front for dreaded microtransactions. Don’t want to put in a few hours of gameplay to earn more cards? Just throw down some real coins to buy a few virtual ones.

So, we don’t get a fresh, exclusive mode to enjoy. But we do get another way to spend money. That makes me groan louder than a nose guard pushing a tackling sled at the end of a grueling practice.

Local cable station-style presentation
I talked about this in my review of last year’s release, but NCAA 14 manages to fumble its ESPN license and overall presentation even further. Once again, its popular College Gameday personalities are missing. Outside of some musical cues, a few graphical layouts, and the Bottom Line score ticker scrolling below the pixelated pigskin, the ESPN influence is downright nonexistent.

Announcers Brad Nessler and Kirk Herbstreit remain disembodied, and some of their old lines from the past continue to haunt the commentary. In some cases, their narration is flat-out broken. On multiple occasions, the sportscasters mentioned that I unsuccessfully went for it on fourth down during my previous possession. They were wrong, yet during those instances, I had to sit through the same condescending Herbstreit speech about how I should have punted the football — which I had done.

Games now have overly hokey — and I’m not talking about Virginia Tech’s mascot — introductory sequences, which include generic country twang-filled hype reels and peppy phrases like “This is it” and “There can only be one!” It’s the kind of stuff that would make a second-rate cable-channel producer proud.

This year, NCAA’s lack of novelty is more evident. Yeah, it now has Infinity Engine physics — which Madden NFL got last year — and Ultimate Team — which FIFA has had for a while. It does play a better game of college football, however, and that’s important.

But ultimately, NCAA Football 14 is like your friend who showed up to the first class of the fall semester with the same haircut, shirt, and summer story to tell. Maybe he lost a few pounds, and you’re happy to see him, but he hasn’t really changed.

NCAA Football 14 releases on July 9, 2013 for the Xbox 360 and PlayStation 3. The publisher provided GamesBeat with an Xbox 360 copy of the game for the purpose of this review.