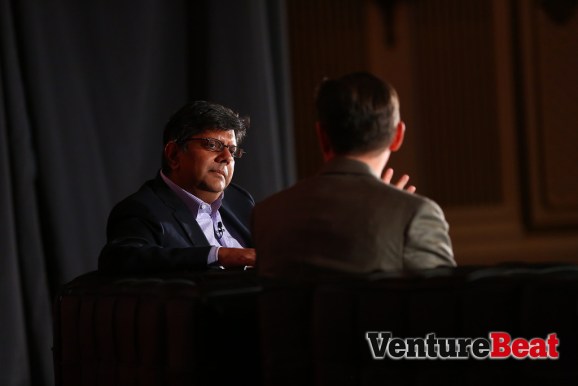 SAN FRANCISCO — Our smartphones and tablets contain a slew of sensors — things like gyroscopes, light sensors, and GPS — but for the most part, they’re all treated differently within every mobile platform. That makes it tough for developers to utilize those sensors, compared to standards-driven technology like Bluetooth.

Ultimately, the current lack of standards for sensors remains one of the biggest innovation bottlenecks in the mobile industry, according to Qualcomm’s chief marketing officer Anand Chandrasekher.

Speaking at our MobileBeat 2013 conference in San Francisco today, Chandrasekher noted we’ll need to focus more on sensor standards to unlock the area of “digital sixth sense.” This will become all the more relevant with the rise of wearable computing, where our devices’s sensors will seem more like extensions of our own bodies. (And eventually, they’ll be a key component of biotech implant gadgets.)

Developers would surely appreciate simpler ways to take advantage of mobile sensors — though the bigger question remains of how we’d actually get companies to rally around common standards.

Naturally, Chandrasekher pointed out that we’ll also need plenty more mobile bandwidth and spectrum to satisfy the sector’s exponential growth. He was hopeful that LTE-Advanced, a major upgrade over current LTE technology, would offer some solutions. Qualcomm’s latest chips can take advantage of some LTE-Advanced features like carrier aggregation, which enables multiple carriers to combine their networks for faster speeds. (Samsung’s Galaxy S4 already has carrier aggregation capabilities built-in.)