Wearable computing like Google Glass is just beginning to invade our lives. Soon, it will be inside our bodies.

That’s the prediction from one of the panelists in the wearable computing track of VentureBeat’s MobileBeat 2013 conference, which kicked off this morning.

“My daughter is getting a PhD in biomedical engineering, and they are floating the idea that wearables will be inside us in the next five to 10 years,” said Gary Clayton (pictured middle), chief creative officer at voice recognition firm Nuance. 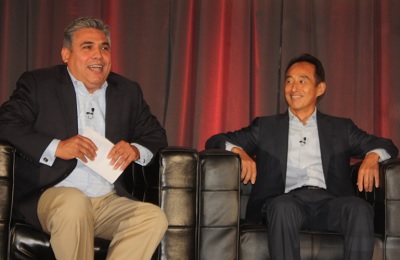 Above: John China and Young Sohn

Wearable devices such as smart glasses, watches, fitness trackers, and others are starting to become central to the roadmaps of many mobile companies. Young Sohn, chief strategy officer at Samsung, played a roadmap video for the MobileBeat audience that showed how a woman could immediately communicate her vital signs to a doctor simply by taping a sensor strip to her wrist and using her phone to transfer the information.

But that doesn’t mean that phones are going away. After all, those devices will likely be more powerful and have better computing per battery life than wearable devices.

But Holove, whose company makes the Basis wrist-based health tracker, believes we’ll see a proliferation of other types of gadgets too. Citing a story by Reuters, he said, “We’re in the Palm Pilot stage of wearables.” That means we have a long way to go in the roadmap toward ideal, iconic devices, just as the Palm Pilot was the rather distant forerunner of Apple’s iPhone.

Google Glass could be that iconic device, as it certainly gets you noticed in a crowd. (Snodgrass was wearing one on stage).

Holove said, “We are starting to see devices people want to hear. We are also seeing a dramatic shift in what sensors cost.” That means that sensors can track more interesting data that makes the wearable device more valuable.

“Now is the time,” Clayton said. “We’re building out the cloud. We need to build the roads that get there. It’s accelerating rapidly.”

Sohn said, “My prediction is that [the use of] wearables will be much higher in the future. … And you will have nanotechnology embedded in your body.”

“We have to start with concrete use cases that solve real problems,” Holove said.