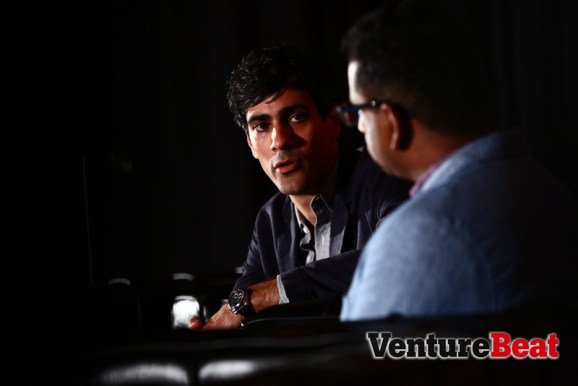 SAN FRANCISCO — Yelp is rolling out a new delivery feature so consumers can not only browse for food but order it as well, the company announced at the MobileBeat event in San Francisco today.

Along the lines of its Open Table partnership, Yelp will work with local delivery services so that customers don’t have to leave Yelp to place orders. Yelp will take care of the entire ordering and checkout experience and process the payments.

“The idea is that there are all these consumers shopping on the site, and Yelp Platform allows them to take that next step — to transact,” said founder Jeremy Stoppelman in an interview with VentureBeat. “The Yelp experience is all about going to local businesses. As you switch between different services, you as the consumer will have a one-stop shop.”

The service will start out in San Francisco and New York through partnerships with food-delivery startup Eat24 and Delivery.com, working with 100 local businesses. Stoppelman described this as a “staging” before the platform enters new markets. Yelp wants to be able to make the service flexible enough to grow easily, and it already has slew of other partners signed up — with the prospect of booking home and personal services as well in the future. Categories like spas, yoga studios, salons and dentist appointments are coming soon, through partnerships with Booker, Intuit’s Demandforce and MindBody.

Yelp is most known for restaurant reviews, but over the past few years the company has taken major steps to be more than just a reviews site. It added in a “Call to Action” feature and Yelp Deals so businesses can target consumers with discounts and offers. One of the challenges with search and review sites is to extend that commerce into the real world, and Yelp Platform is an extension of that effort.

Onstage at MobileBeat 2013, Stoppelman said the goal is to close the loop to create the easiest process for consumers.

“It’s all about focus,” he said. “We come in every day thinking about how to build the best local services, gather the best local content that is of the highest quality, the most useful, and present that to users. If you are Larry Page at Google, his first idea every morning is probably not what’s going in on each city and how to support local communities.”

Google, Facebook, Foursquare, and a bevy of smaller startups are taking on Yelp with their own search features, but Stoppelman said that he is not concerned. Google and Facebook aren’t focused exclusively on local businesses, which gives Yelp an advantage, and smaller companies don’t have what he says is the same breadth and depth of content.

Yelp went public last year, and its stock has continued to do well (as of this report, it’s a a little more than a point away from its 12-month high of 37.66). It receives 102 million unique visitors a month, with 30 percent of that traffic coming from the mobile web. Yelp’s also seeing 10 million uniques a month from its mobile app. Stoppelman said that the mobile users tend to spend the longest on the site and are the most engaged.

Curating context is a key part of the mobile experience. Businesses have unprecedented access to information about their consumers — they can learn about our tastes and interests from social media, our purchasing habits from previous online behavior, and perhaps, most important, our location. This presents a key opportunity to turn online activity into offline commerce, by helping consumers find exactly what they are looking for.

Two weeks ago, Yelp launched a revamped Nearby feature that shows recommendations based on time of day, the social graph, newly opened businesses, and so on. In the chaos that is the Internet, presenting people with relevant information is a key service. We no longer want to search for things we like — we want them presented to us. Furthermore, people don’t want to visit multiple webpages or enter their credit card information over and over, particularly on mobile. Stoppelman said that people are already going to Yelp to make decisions, so it’s natural that they would want to do the rest of the ordering and purchasing process on Yelp, too. Yelp Platform is available on iOS, mobile web, and desktop. Android is coming soon.