I couldn’t stop myself from rolling my eyes when publisher Square Enix announced that the next Deus Ex would be an iOS game. While many claim that mobile gaming is the future, I’ve remained skeptical. I like buttons, dammit! Not all this touching-and-swiping nonsense!

The last Deus Ex, Human Revolution, was one of my favorite first-person shooter/role-playing game hybrids, largely because it was so complex. How could a sequel, out now, played on an iPad or iPhone even hope to compare to the real thing?

Well, much to my surprise, it turns out it can come pretty darn close.

Whenever a publisher brings a big console franchise to mobile, you usually see a lot of compromises. Sometimes what was once a free-roaming FPS becomes an on-rails corridor shooter. Sometimes the mobile version will change genres completely, usually to something much simpler (a 3D action game is suddenly a 2D platformer). This isn’t the case with The Fall, which plays almost exactly like Human Revolution. 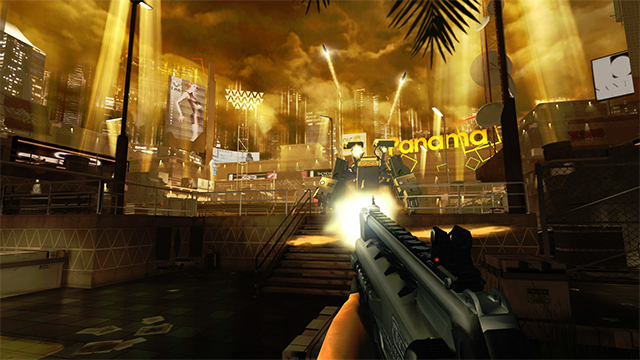 You’re still exploring a series of small, open areas, either opting to sneak your way to your objectives or just gunning down any opposition in your way. You can level up and pick between a variety of upgrades, including some that can temporarily make you invincible or turn you into a hacking machine (most of the optional abilities help you access secret areas and better routes through your missions).

It’s all just as much fun as it is on a console, but it really is surprising how well the experience translates to a touchscreen. You use your left thumb to move and your right to change your direction, which replicates the twin-stick setup most of us know from controllers (you can also double tap to where you want to go, but this is more of an interesting gimmick than an effective way of travelling).

All of your actions, like shooting, changing weapons, or opening doors, become touch buttons. They can get a little cluttered, but you’re able to customize the complicated display. I was having a problem accidentally pushing the shoot button when I’d just try to walk, but I was quickly able to move things around to my liking.

Basically, if you were a fan of all the mechanics from Human Revolution, then you’ll dig The Fall. 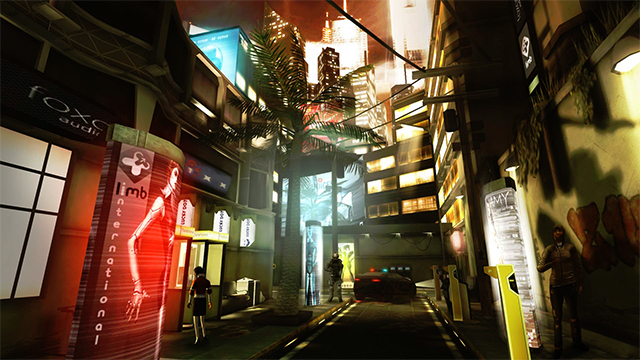 The Fall ran smoothly on the 4th generation iPad I played it on, with no noticeable drops in framerate. The environments looked crisp and detailed, especially the streets of Panama City, which eerily glows with the lights of neon signs and digital projections. Character models looks a bit less impressive, and The Fall unfortunately continues Human Revolution’s tradition of janky animation loops. Still, this is a pretty handsome iOS game.

One way The Fall actually improves upon its predecessor is in how you buy guns, ammo, and other commodities. Instead of having to physically walk to a store, you can access the black market at any time from the pause menu. Let’s say you find yourself in need of a crossbow in the middle of a mission. A couple of clicks later and you can have one. Sure, it doesn’t make any logical sense, but it sure is convenient.

Of course, this is also where the “real money” comes into play. You can buy in-game currency and experience points with a couple of very real dollars. This sort of “pay to win” nonsense irks me, but I was able to beat The Fall’s campaign easily enough without having to rely on such dirty tactics. 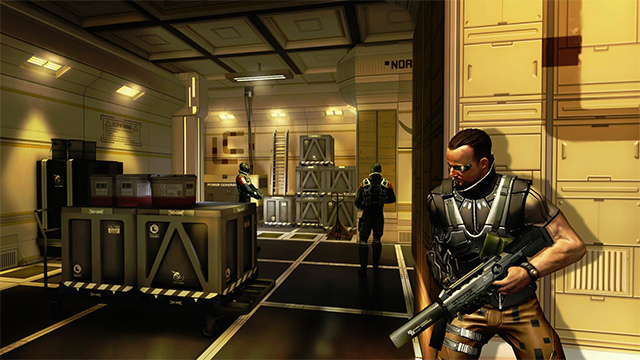 Who are all these people?

While set in the same fictional world and year as Human Revolution, The Fall features different characters, most of which I couldn’t tell you much about. The story gives you a lot of names and background information quickly, and constantly references past events that I could never really comprehend.

Doing a little research, I discovered that this is essentially a sequel to a Deus Ex novel, The Icarus Effect, and it takes place directly after the book. This is a big pet peeve of mine. I don’t want to have to read a whole novel just to know what’s going on. And while I’m hesitant to pass judgement on a book I’ve never read, video game novels usually kind of … how to put this diplomatically … blow.

I’m fine with The Fall not being a direct sequel to Human Revolution, but it should have started its own story and introduced its own characters.

Oh, I guess it’s over

I was finally starting to get engaged with the plot when five hours into it things abruptly ended with a “To be continued” screen. I’m not a big fan of episodic gaming experiences, especially when it feels like one full game haphazardly split into smaller chunks. I’d rather binge on my RPGs, and the thought of having to play a few hours every few months or so pains me. While it’s technically a fine value at $7, this sort of game really lends itself to a longer experience. 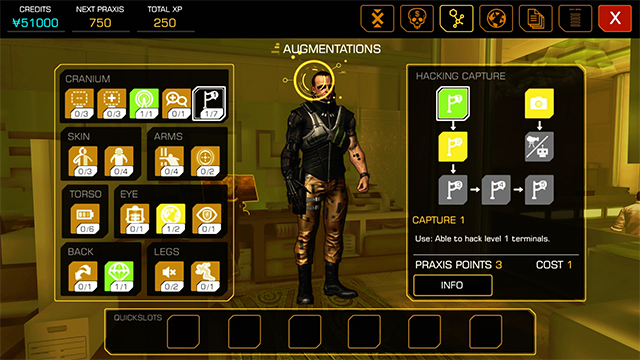 Even on a 4th generation iPad, The Fall still crashed a few times. Autosaving thankfully prevented me from losing much progress, but it was still annoying to have to restart. Also, I had a couple contextual button prompts get stuck, rendering my display unwieldy and unresponsive. The only fix I found was loading my last save game.

Better on the big screen

While The Fall technically works on newer iPhones, you’ll really want to play it on an iPad. Like I said earlier, the overhead display quickly fills up with multiple button prompts, and they can easily clutter smaller screens. You’ll also have a hard time reading some of the smaller texts and picking out faraway enemies.

I’m shocked. The Fall works. Bringing an experience as complicated as Deus Ex’s to a touchscreen should have been a mess, but I was easily sneaking, hacking, and headshotting my way through the short campaign. I don’t know if I’m ready to call myself a mobile gaming convert, but this is definitely one of the deeper experiences I’ve had on an iOS platform.

Deus Ex: The Fall is out now for iOS devices. The publisher provided GamesBeat with a digital copy for the purposes of this review.