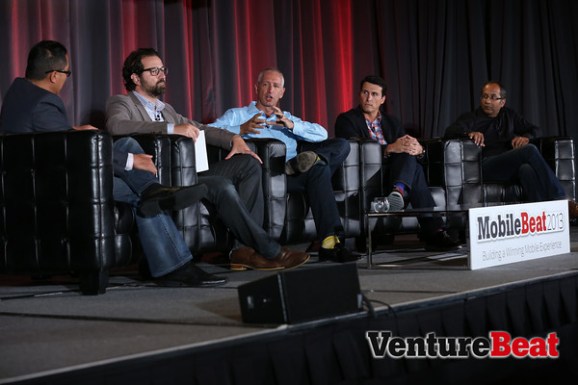 (From left to right) Mikkel Svane of Zendesk, Sam Lawrence of CrushPath, Alex Bard of Salesforce, Milind Gadekar of CloudOn at MobileBeat 2013.

SAN FRANCISCO — Not only are we consuming content on an iPhone, we are creating it there as well.

At MobileBeat 2013, executives from business software companies like Salesforce, CloudOn, and Zendesk spoke to the rapidly changing way that employees are choosing to work on mobile.

CloudOn CEO Milind Gadekar noticed that it’s both “interesting and non-intuitive” that people regularly create full documents on their smartphone. CloudOn is a company that brings Microsoft Office to any mobile or tablet device. To his surprise, Gadekar found that the metrics for iPad and iPhone use are virtually identical.

Young folk today must be more dextrous, he joked, and are not hindered by tiny keys.

Salesforce senior vice president Alex Bard said the company isn’t yet willing to employ a mobile first strategy just yet. He believes that the personal computer is not dead.

However, by 2017, Bard predicted that about 90 percent of business applications will be available on both PC and mobile. So Salesforce is developing mobile applications for customers to quickly add and edit content.

Zendesk, a company that provides customer service software, has seen massive uptick on mobile. About 25,000 mobile devices activate the service every month, CEO Mikkel Svane announced on stage at MobileBeat. The split between Android and iPhone is roughly even; the company just experienced its first quarter when Android beat iOs.

Concluding the discussion, Sam Lawrence, the CEO of CrushPath, said that enterprise startups should be aware of how this new generation is “just using mobile a lot more.”

He advised that young companies and app developers tailor the experience for mobile, rather than treating it as an after-thought. “My nieces and nephews just don’t use personal computers anymore,” he said.